A group of teenagers serving as 'Covid-19 Student Ambassadors' joined Governor Gretchen Whitmer to receive a dose of the Pfizer Covid vaccine at Ford Field during an event to promote and encourage Michigan residents to go and get their vaccines on April 6, 2021 in Detroit, Michigan.
Photographer: Matthew Hatcher/Getty Images

The coronavirus pandemic is erupting anew in youth sports across the U.S., prompting fresh warnings from President ’s health advisers and adding a headwind to his push to reopen classrooms.

Several states have faced recent outbreaks linked to sporting events and to a variant of the virus from the U.K. called B.1.1.7. Michigan is an epicenter both of the latest surge and the U.K. variant, which is regarded as more transmissible than the original strain of the virus and may be deadlier.

Elementary, middle and high schools have driven the outbreak in Michigan more than any other setting, largely through sports such as basketball and wrestling, according to data compiled by the state.

Despite rising vaccinations, what had been a dramatic decline in U.S. cases has stalled as new variants take hold and overtake the original virus -- and as pandemic-weary Americans clamor to return to normal life. A new surge in cases threatens Biden’s hopes to get more classrooms reopened -- a political vulnerability Republicans have sought to exploit by blaming teachers’ unions and Democrats for keeping children at home.

“We remain focused on and committed to our objective of reopening schools five days a week,” White House Press Secretary said Wednesday. 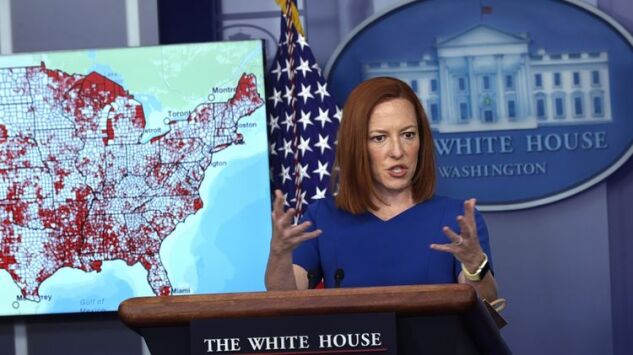 WATCH: Psaki says Americans must “do their job” and get the vaccine. She also says the administration is committed to its objective of reopening schools.
(Source: Bloomberg)

New waves of the pandemic have forced school closures in other countries, such as France and in part of Canada, though the pace of U.S. vaccinations is the envy of much of the rest of the world. The U.S. Centers for Disease Control and Prevention is recommending school sports be curbed, instead of closing schools altogether.

“What we’ve learned about this virus is: No one is an island,” said Joneigh Khaldun, Chief Medical Executive for the State of Michigan and a member of Biden’s Covid-19 Health Equity Task Force. Multiple factors are driving the state’s surge, she said.

“There’s no question that school sports are a part of it,” she said, citing the B.1.1.7 variant as another factor. “Whereas before they maybe spread it to two people, now they’re spreading it to five.”

The problem has been exacerbated by the fact that states are only now opening their vaccination programs to teens who are 16 years old and up. Additionally, the vaccine has yet to be approved for those under 16.

, the head of the CDC, has twice this week warned that school sports are one source of new outbreaks, and the agency has dispatched help to Michigan in particular to deal with its surge.

“We are hearing reports of clusters of cases associated with daycare centers and youth sports. Hospitals are seeing more and more younger adults,” Walensky said Wednesday. She said the CDC is helping Michigan boost testing in school sports, while also investigating outbreaks in other settings, like jails.

For places with substantial community spread, Walensky urged “refraining from youth sports that are not outside and cannot be conducted at least six feet apart,” in part to keep schools open.

Walensky announced Wednesday that B.1.1.7 is now the most common version of the virus in the U.S., but stopped short of explicitly linking the variant with sports.

Several states have experienced outbreaks tied to sports. In Michigan, 301 of the state’s 991 ongoing known Covid outbreaks are connected to K-12 schools, double the next largest category of transmission. About 70% of cases are in high-school-age students.

Basketball, hockey and wrestling have each been connected to more than 50 clusters and 100 cases. But other sports, including baseball, volleyball, lacrosse and soccer, are tied to far fewer cases.

Khaldun said schools drove outbreaks in recent weeks, but now the virus is widespread, and it’s not only kids that are sick. Michigan’s hospitalizations rose 45% last week from the previous week, the sixth straight weekly increase. Admissions are rising for all age groups, and are highest for those 50 to 59 years old.

“I’m obviously incredibly concerned about what we’re seeing in the state,” she said.

In Vermont, the state has investigated four instances in roughly the past month where an illness among a student on one high school team sickened those on another team. The outbreaks were linked to three hockey games and one basketball game.

Minnesota officials warned last month of outbreaks related to school and club sports, including hockey, wrestling, basketball and skiing. B.1.1.7 has been found in athletes, coaches, students and those they live with, the state said. At the time, the state government recommended a two-week pause for youth sports.

In Florida, researchers investigated a pair of December high school wrestling tournaments after an attendee tested positive, according to a CDC study. They found a total of 79 confirmed cases, including about 30% of attendees, as well as classmates, teachers and family. One death, of an adult over 50 years of age, was reported, and a total of 1,700 in-person school days were lost as a result of the outbreak.

“We definitely should not be doing sports, except sports where you can wear a mask and be distanced,” said , a Co-Director of the Healthcare Transformation Institute at the University of Pennsylvania, who served on Biden’s transition Covid advisory board.

Classes should move outside as much as possible, and vaccines should be promptly approved for children under age 16, he said.

Biden has pressed to reopen schools while also balancing the support of teachers, who have fought what they regard as rushed or incomplete reopening plans. , president of the American Federation of Teachers, urged ramped-up testing and adherence to CDC guidelines.

“The last thing we need is a fresh wave of shutdowns caused by the new variant spreading rapidly in school sports,” she said. “Let’s not spike the ball on the 20-yard line, let’s continue our drive for safety so we can fully enjoy the thrill of school sports in the not-too-distant future.”

While Walensky recommended school sports be curtailed, it isn’t clear whether state officials will heed the guidance. The office of Michigan Governor , a Democrat, declined to say whether she’s considering any restrictions for school sports.

Michigan has set up vaccination sites aimed specifically at younger adults and now requires weekly testing of students who play sports. The state opened eligibility for vaccines this week to everyone age 16 and up.

“The cases are clear that we are going in the wrong direction in Michigan,” said Khaldun.

To contact the reporter on this story:
in Washington at jwingrove4@bloomberg.net