The coronavirus pandemic has put a spotlight on persistent health threats to schoolchildren and teachers posed by crumbling U.S. campuses with leaking pipes or mold-prone ventilation.

Now, as more schools reopen for in-person teaching, the Biden administration is using that focus to seek billions of dollars in spending to repair and maintain K-12 schools—an area outside the traditional scope of federal infrastructure or education aid.

“It’s a battleground topic,” said David Sturtz, a partner at school planning firm Cooperative Strategies. “The vaccine can get you back in school but not provide long-term peace of mind. The real need out there dwarfs what we’re allocating.” 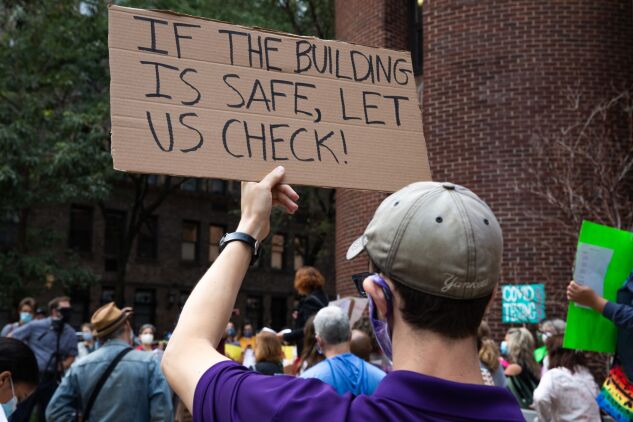 A demonstrator holds a sign during a strike outside Hunter Campus High School in New York in September 2020.
Photographer: Paul Frangipane/Bloomberg

With Covid-19 vaccines in hand and policymakers negotiating over spending numbers, champions of safer school buildings are looking to the White House’s $2.25 trillion infrastructure proposal as their best chance to address longtime needs.

Since the pandemic hit over a year ago, K-12 schools have received roughly $280 billion in emergency federal aid, most for immediate needs like personal protective equipment, cleaning supplies, and technology for remote instruction.

But fixing infrastructure like air filtration or water systems can be much more costly, and the scope of needed repairs is vast.

Roughly 36,000 K-12 campuses need to update or replace ventilation or heating systems, according to a Government Accountability Office report released last year. Of the school districts GAO surveyed, 41% needed such repairs in at least half of their schools. If left unaddressed, those outdated systems can lead to mold and worse indoor air quality.

Rep. (D-Va.), chair of the House Education and Labor Committee, has introduced a bill () that would authorize $100 billion in grants and $30 billion in bond financing to schools with urgent needs for building upgrades.

The White House’s infrastructure plan, released in March, proposed roughly half that, with $50 billion in grants and $50 billion in bonds. Advocates say that framework would do less to aid poor districts that can’t raise financing for bonds.

Scott, whose committee will be tasked with drafting legislative language for much of the Biden infrastructure plan, has said he’ll push for funding in line with his proposal.

“In my district, some school staff are concerned about returning to campus not just because of Covid-19 but also because some school buildings have had mold and other serious health hazards since even before the pandemic,” Scott said at a House hearing last week.

Either plan would mean an unprecedented level of federal spending on school buildings, but would likely cover only part of needed repairs at thousands of campuses across the country. Upgrading the heating, ventilation, and air conditioning systems alone in K-12 schools could cost $72 billion, one analysis found.

Most districts don’t have the resources to make those kinds of long-term repairs, opting during the pandemic for less costly alterations to get classrooms back open.

“We fix things as they break,” White said.

The Biden proposal isn’t nearly enough to solve those types of problems in the nation’s poorest schools, he said. “That sounds like a lot of money,” he said. “I don’t think it matches the scale of the need.”

Even as school districts and some states have sought assessments of infrastructure needs, there is no full national accounting of the conditions of the country’s K-12 campuses, meaning the scale of the problem may be even bigger than understood by policymakers.

“A federal program that incentivizes more equitable school facilities even at 10% of the need is truly a game-changer for poor districts and communities,” she said.

Across the country, the bulk of the money for building and maintaining public school buildings comes from levying local property taxes. That leaves areas with the lowest property wealth struggling most to raise funds or get voters to pay for new school facilities.

Large urban school districts wrestle with the funding equation—but so do property-poor districts in rural areas and midsize cities.

School districts are even more reliant on local funds for capital spending, Filardo said. State and local revenue each covers about 45% of the average public school district’s operating budget, with federal aid covering the remaining 10%. But for building construction and maintenance, states cover 18% of costs on average—while the federal contribution historically is close to zero.

“It’s the most regressive funding system in education,” Filardo said.

Many states have designated funding for school buildings—often at the prompting of lawsuits over inequitable resources. But the country still falls $46 billion short each year in meeting maintenance and capital investment, Filardo’s organization found in 2016. And spending varies widely state to state. 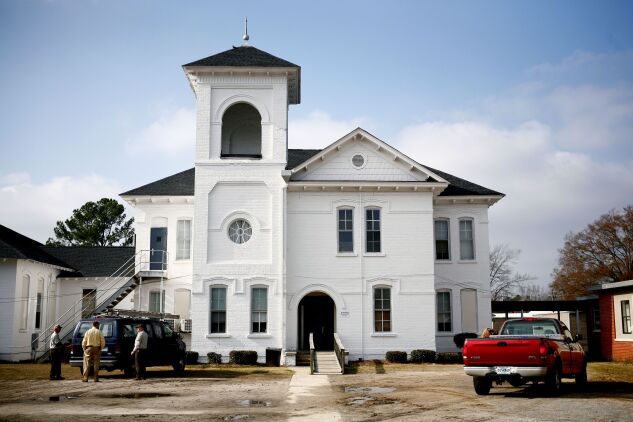 The J.V. Martin Junior High School in Dillon, S.C., shown here in January 2008, was constructed in 1896. The school’s auditorium that was built in 1917 was condemned for safety reasons in 2007, and students still use a 1926 gym without air conditioning or heat.
Photographer: Melissa Golden/Bloomberg News

Researchers have found that building conditions can affect students’ learning in the classroom. Hotter school days are linked to lower PSAT scores, according to a 2018 study.

K-12 schools were big beneficiaries of federal pandemic relief last year. But the stimulus packages focused on immediate needs such as laptops and Wi-Fi connections for remote learning, or cleaning supplies to reopen campuses. Building repairs like HVAC upgrades were only designated as an allowable use of the $126 billion in K-12 aid in the American Rescue Plan (), which Biden signed into law in March.

But school leaders still face dilemmas over spending priorities, said Michael Griffith, a policy analyst focused on school finances at the Learning Policy Institute. “There isn’t enough money available to do everything you need to do.”

But a 2019 assessment found the cost of repairing the district’s school buildings would be roughly $700 million.

Students in poorer areas suffer twice from inequitable funding, said Griffith. Their schools receive less money per student, and they also attend classes in older buildings. A major injection of federal funds could start to reverse that second trend, he said.

“The goal is always to ensure a kid’s education is not determined by their ZIP code,” Griffith said. “Especially when it comes to school facilities, that is often not the case.”

To contact the reporter on this story: in Washington at akreighbaum@bgov.com