Stephens died of complications from kidney failure at her home in the Detroit area, according to the American Civil Liberties Union, which represented her. She was 59. 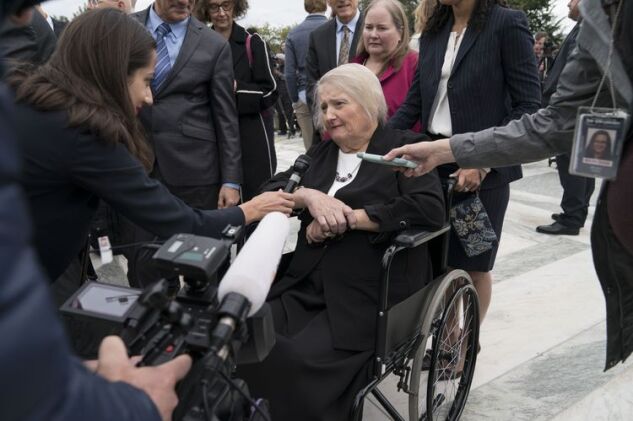 Aimee Stephens speaks outside of the U.S. Supreme Court in Washington, D.C. in 2019.
Photographer: Sarah Silbiger/Bloomberg

Stephens was a transgender woman who was fired from her job as a funeral-home director after telling the company she planned to live openly as a woman.

Her case and two others that were in October are the biggest LGBT cases since the Supreme Court legalized same-sex marriage nationwide in 2015. The fight concerns the reach of the main federal job-bias law, which explicitly bars discrimination on the basis of sex. The key question is whether employer decisions based on sexual orientation or gender identity qualify as sex discrimination.

Tyler Richard, a spokesman for the ACLU, said in an interview that Stephens’s case will be carried on by her estate.

“Aimee did not set out to be a hero and a trailblazer, but she is one, and our country owes her a debt of gratitude for her commitment to justice for all people and her dedication to our transgender community,” said ACLU lawyer Chase Strangio in a statement.

Another case heard alongside Stephens’s case also involves a person who has since died. The case of Donald Zarda, a gay skydiving instructor who was fired in 2010 and died in 2014, also is being pursued on behalf of his estate.

Stephens said in an last year that, despite the high court’s 5-4 conservative majority and the Justice Department’s reversal of position on protection for under President , she had no regrets about having brought her case. “I’d do it again,” she said. “If you’re part of the human race, you should have the same rights as everybody else.”

To contact the reporters on this story:
in Washington at dmclaughlin9@bloomberg.net;
in Palo Alto at jeidelson@bloomberg.net

To contact the editors responsible for this story:
at sforden@bloomberg.net