Ordered by the governor’s office to quickly shutter his five sprawling Arizona workout clubs late Monday, Bahram Akradi was fuming. Yes, Covid-19 cases were surging in the state but, he said, his employees at Life Time fitness were on top of it.

On Wednesday, the founder of the Minnesota-based fitness giant had joined the ranks of business owners defying orders to stay closed. “It is the last thing I want, to go against the desires or wishes of the governor,” said Akradi, who has filed an administrative challenge to the order. “But they have literally left us with no choice.”

Governors are taking swift action to combat a resurgence of virus cases, especially in the U.S. South and West, which again threatens to overwhelm hospitals and set back America’s nascent economic recovery. The nation’s top infectious-disease expert, , said Tuesday that coronavirus case counts could more than double to 100,000 a day if behaviors don’t change.

The new surge is creating a parade of grim superlatives. Florida’s Miami-Dade County reported its highest numbers of hospitalizations, intensive-care patients and ventilator use in at least two months. In Houston, intensive-care units hit 97% of normal capacity as Texas reported a record number of new cases. 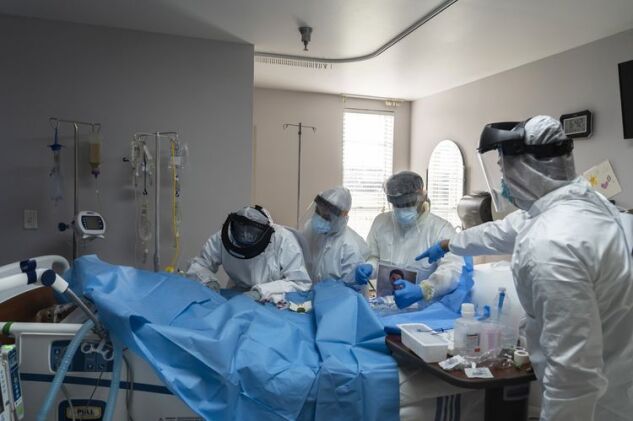 Doctors and nurses treat a patient in the Covid-19 intensive care unit at the United Memorial Medical Center in Houston, Texas, on June 29.
Photographer: Go Nakamura/Bloomberg

The numbers are spooking governors who had hurried to reopen their economies, many at the urging of President Donald Trump, and they are pausing -- if not reversing -- the process. Arizona, Florida, Colorado and Texas forced bars and nightclubs to close in recent days, while Arizona expanded the shutdown to gyms, water parks and movie theaters. Other states are reconsidering allowing restaurants to reopen dining rooms.

Already hammered by two months of lockdowns, businesses say they’re unfairly being targeted because of the actions of a few operators, including an East Lansing, Michigan, bar linked to dozens of infections among young people. Even owners who approve of shutdowns are frustrated at the sudden changes in direction, which are costing them thousands of dollars in lost merchandise and forcing them to furlough people they’ve just brought back.

In Texas, two dozen bar owners are suing to overturn Governor ’s order closing taverns, arguing he is picking winners and losers among the state’s businesses, the Austin American-Statesman reported. And a Republican lawmaker in New Jersey is proposing legislation to reimburse restaurant owners for food costs and other expenditures affected by the closures.

The bill is unlikely to pass, but it would certainly help owners such as Jeffrey Bank, who heads . Bank was eager to reopen Carmine’s restaurant inside the Tropicana casino in Atlantic City, New Jersey, on Thursday, even at 25% capacity. Then Governor indefinitely delayed the restart of indoor dining, citing what he calls “knuckleheads” who flouted social distancing rules.

Bank figures he’ll lose $100,000. He donated all the food his staff had prepared and let go of about 100 people whom he’d just recently rehired.

“I don’t know why one brush paints everyone,” Bank said. “Having a restaurant inside a casino is not the same as having a bar in the middle of New Jersey. They’re different animals. A casino is a controlled, secure environment. Why is it all or nothing?” 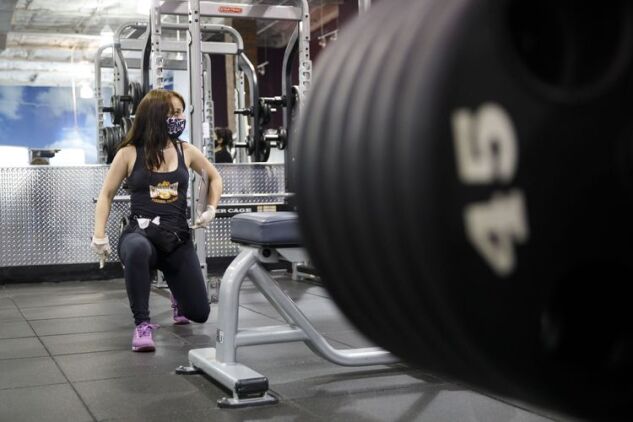 A personal trainer wears a protective mask while working with a client at a gym in Burbank, California, on June 23.
Photographer: Patrick T. Fallon/Bloomberg

Ron Smith has had dining rooms open for the past month at his 13 McDonald’s stores in the Las Vegas area. But on Monday, he decided it was best to reclose them as infections spike across the U.S.

“We were incorrect, meaning the country,” he said, on opening up certain areas this spring. “It’s disappointing.”

Smith said he’s not hopeful that they’ll be able to open again any time soon -- and that for some communities it may not be until next spring.

Despite closing his dining rooms, he’s keeping his full staff employed, though with fewer hours. He’s even hiring now. Applications are up, but turnover is high as people start to return to their past jobs.

In states with a resurgence of the virus, the economy is beginning to cool again, following a rebound that saw the U.S. jobless rate unexpectedly drop last month to 13.3% from 14.7%.

Customer transactions at major restaurant chains had been increasing in recent weeks, even if they were still down when compared with last year. However, that momentum reversed itself in the week ended June 21 after infections rose in much of the South and West, according to market researcher NPD Group.

In Arizona, transactions at major chains had roared back and were down only 1% in mid-June from a year ago, but now they’re down 7%, NPD data show. Transactions slipped by 5 percentage points in both North Carolina and Nevada.

Restaurants and cafes that depend on office workers have been suffering. Google told employees Tuesday it was the date to reopen U.S. offices to Sept. 7, two months later than originally planned.

Many small cities have seen their downtowns flower with restaurants and nightclubs in recent years, and they fear that another round of shutdowns will roll back that progress. Lakeland, Florida, a city of about 110,000 an hour from Orlando, has a dozen restaurants and six bars that draw people at night, compared with a couple of each 20 years ago, said Julie Townsend, who runs the .

She worries that downtown will go to bed again at dusk if too many close. Jack McHugh, who manages one of downtown Lakeland’s mainstays, Molly McHugh’s Irish pub, will try to make do during the shutdown by selling large bottles of beer known as growlers. 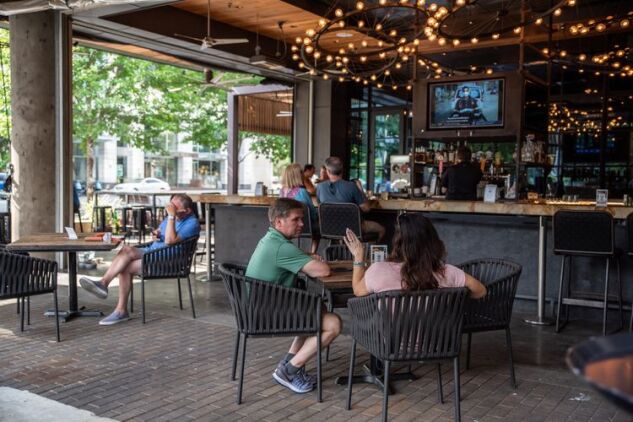 People sit at tables at a bar in Austin, Texas, on June 25.
Photographer: Sergio Flores/Bloomberg

“They feel like they’re being punished by the few bad operators, and that bars are an easy target,” Townsend said. “If nightlife goes away, downtown goes dark again after 5, and that would be devastating.”

For some businesses that operate in multiple jurisdictions, just keeping up with requirements in different states is a headache.

heads Little Beet, a chain of vegetarian restaurants on the East Coast that are a mix of full-service and fast-casual units. She had been planning to reopen her biggest full-service restaurant on New York’s Park Avenue on July 6 and had just hired four people. With New York’s plan for dine-in service now in flux, she may have to shift them to fast-casual spots.

“The most challenging problem for us has been finding the source of truth in each municipality we’re in,” Mulligan said. “My team and I have learned to check local news sources every morning, noon and evening and then figure out how to operate under the specific regulations that we find. The month of June has been consumed with what we’re allowed to do at each location each day.”

With the scope of the virus’s latest spread uncertain, July may be no better.

--With assistance from , and .

To contact the editors responsible for this story:
at smerelman@bloomberg.net