The Pyeongchang Olympic Stadium, the venue for the opening and closing ceremonies at the 2018 PyeongChang Winter Olympic Games.
SeongJoon Cho/Bloomberg via Getty Images

Olympic skeleton hopeful Savannah Graybill has worked a lot of odd jobs—waitress, babysitter, remote copywriter—to stay in her sport. But her current gigs at Dick’s Sporting Goods and Adecco Group were built to work with her busy schedule thanks to a U.S. Olympics Committee program.

“If it’s a job and it pays, I’ll do it,” Graybill told Bloomberg Law.

Many of the jobs available to athletes while they’re training are in the retail and restaurant industries because the businesses have flexible schedules and seasonal openings, Graybill said. But those jobs are often too physically demanding on top of training and they don’t always pay enough.

Her jobs at Dick’s and Adecco were opportunities she found through the U.S. Olympic Committee’s Athlete Career and Education Program (ACE), a tool designed to help Olympic veterans, retirees, and prospects find employment and educational opportunities.

The program became fully operational in 2017, and similar offerings are available in other countries under the International Olympic Committee’s Athlete Career Programme.

Funding for the USOC’s Athlete Career and Education Program comes from corporate sponsorships and donations, unlike programs in most countries.

“I think one thing that’s frustrating for us is the government funding that other programs globally receive,” Leslie Klein, director of athlete career and education services for the U.S. Olympic Committee, told Bloomberg Law.

Companies such as Dick’s, Adecco, Visa Inc., and 24 Hour Fitness partnered with the program to provide athletes with employment and training opportunities. The program also has offerings that target the education needs of athletes, such as its partnership with DeVry University, which Graybill used to get her master’s degree.

In 2017, 1,673 athletes used services provided by the ACE Program, according to its annual report. Of that number, 133 were placed into part-time or full-time positions.

Side Gig of Champions

One of the biggest employers of Team USA members and contenders is Dick’s.

Through its Contenders program, the Pennsylvania-based sporting goods retailer has employed more than 250 Olympians and Olympic hopefuls since its partnership with Team USA started in 2015. Twenty-one percent of them have advanced to the Olympic games.

“Many Americans are not aware that most Olympic and Paralympic hopefuls don’t receive big sponsorship deals, nor do they receive any federal funding while they chase their dreams,” Scott Hudler, vice president and chief marketing officer for Dick’s, told Bloomberg Law in an email.

The Contenders program was created to support athletes who needed assistance the most, Hudler said.

Eleven Dick’s employees have made their way onto Team USA’s roster for the PyeongChang games, and five Paralympians are waiting to be named to the team, the company said. Dick’s currently employs 120 athletes at 90 different locations in the U.S. as part of its Contenders program. 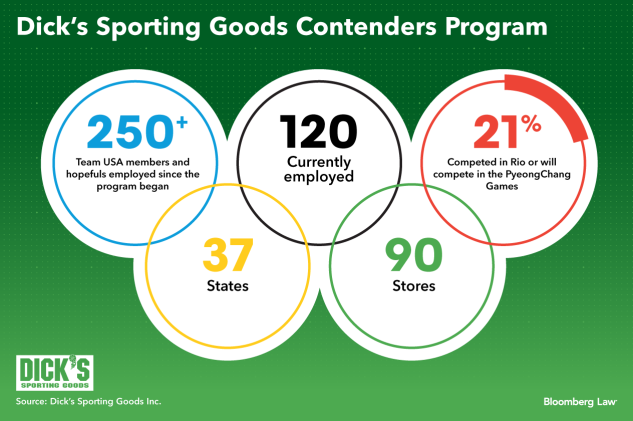 “I’ve never really had a full-time or part-time job in the past,” McCoy said. “It’s always been kind of tough to do with my schedule.”

His part-time sales associate position at Dick’s in Pittsburgh was a “perfect fit.” His managers understood his needs as an athlete and student, and were willing to help him with a flexible schedule. McCoy said he works one day a week

McCoy likely won’t be competing with the sled hockey team representing the U.S. in PyeongChang, but he’s already vying for a slot on Team USA for the 2020 summer Paralympics in Tokyo. Over the next few years, McCoy will be training for “paracanoe,” a sprint rowing race that debuted at the 2016 Paralympics in Rio.

Graybill, who works at the Dick’s in Lake Placid, N.Y., said the job gave her an opportunity to work a couple nights a week during her training, while still getting competitive pay. Even though she’s about an hour away from her Dick’s location, it’s near where she gets training, so it works.

“To work for a company that is very sport-forward and really understands our schedules is great,” Graybill said.

In September 2016, Dick’s extended its partnership with Team USA to go through the games in PyeongChang, but the company hasn’t announced an intention to extend the partnership again. Dick’s couldn’t confirm the future of the program with Bloomberg Law.

Employment programs, like the ones offered by Dick’s and others before it, “are truly invaluable,” Jimmy Pedro, a two-time Olympic judo bronze medalist and world champion, told Bloomberg Law.

Pedro was fortunate enough to have a family business as a side job when he was training, but several fellow judo competitors on Team USA found work through an employment partnership Home Depot used to have that was similar to Dick’s. For those athletes, the Home Depot partnership helped them stay financially stable, Pedro said.

Home Depot’s partnership ended the year after the 2008 recession.

“The challenge we faced was that Monster makes money from employers posting,” Pedro said. When employers struggled during the market downturn that followed the Sept. 11 attacks, the website foundered and eventually dissolved.

The ACE Program has a similar internal website for athletes to peruse resources, Klein said. The program is currently working to create more partnerships with corporations to build its resources.

Pedro took his experience working with Monster and applied it to the business world. He now owns a gym in Massachusetts, is president of Fuji Mats and vice president of Fuji Sports, a martial arts uniform and gear developer. He has also carved out time to coach several athletes to Olympic success, and he hired one of those athletes to help him with social media marketing.

“He’s never worked another job ... but what he brings is work ethic,” Pedro said of his employee Travis Stevens.

To this day, Pedro is loyal to the companies that support Team USA for how they helped him. He gets his cable from Comcast Corp.'s Xfinity, uses AT&T for his phone plan, and drives a BMW—all current or former sponsors of the U.S. Olympic team.

To contact the reporter on this story: Madison Alder in Washington at malder@bloomberglaw.com

To contact the editor responsible for this story: Jo-el J. Meyer at jmeyer@bloomberglaw.com