What you need to know this week about workplace trends, surveys, and reports.

Something’s Rotten in This Office

Chances are nobody in your workplace is going to be the first to complain about Joe’s smelly cologne.

Nearly half (46 percent) of 1,011 U.S. workers surveyed by Menlo Park, California-based staffing firm OfficeTeam have preferred to suffer in silence rather than speak up about an offensive odor. Just 17 percent chose to confront the culprit, 15 percent asked a doubtless thrilled HR department to step in, and a lucky 37 percent claim never to have endured an olfactory offense at the office.

While the topic is amusing, there can be more serious implications. “Office smells may not seem like a big deal, and it can be an awkward topic to bring up, but it’s something that should be addressed before they offend or disturb others,” Brandi Britton, district president of OfficeTeam, told Bloomberg Law March 19. “If a manager feels that a worker’s scents are distracting colleagues or negatively affecting their productivity—or receives complaints from team members—he or she should take the individual aside to discuss the matter. Employers may opt to introduce fragrance-free policies to help define what is and isn’t allowed in the office.” 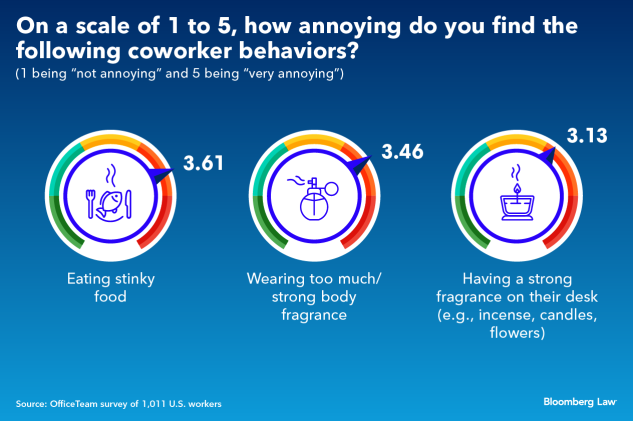 How much work is really going on in your office?

It’s amazing that anything productive is getting done at all, if you believe those workplace distraction surveys that keep appearing. Nearly one in six employees (16 percent) are almost always distracted, according to a survey of 1,000-plus U.S. workers conducted in February and released March 20 by online education firm Udemy for Business. The top culprits are chatty co-workers (cited by 80 percent of respondents), followed by office noise (70 percent), and changes in the workplace (61 percent).

But among the younger cohort, the smartphone (69 percent) is the No. 2 culprit. Among all workers, the top online distraction by an overwhelming margin is Facebook (65 percent).

“Distraction is a silent thief, robbing people of productivity and morale. Don’t leave people to their own devices,” Darren Shimkus, vice president and general manager at Udemy for Business, told Bloomberg Law March 14. He suggested setting rules for the use of social media and personal devices, training employees on how to use email productively, and training workers on time management and other soft skills.

Wealth of a Salesman

Arthur Miller had a character in his most famous play say, in dialect, that “a salesman is got to dream.” Well, financial dreams seem to be coming true for salespeople at the top of their profession.

The number of sales executives who were among the top five highest paid employees in their large, publicly traded companies rose to 218 in fiscal year 2016 compared to 123 in fiscal 2012, board intelligence consultancy Equilar found in a survey. That 77.2 percent increase covered U.S.-based or -listed public companies with more than $650 million in market capitalization in fiscal 2016 that filed proxy statements for that year before Aug. 15, 2017.

The highest paid individual Equilar found was David Schneider, chief revenue officer of ServiceNow Inc., who received just under $17 million in total compensation in fiscal 2016. Even the 10th highest paid on Equilar’s list, Jon McNeill, president of global sales and service at Tesla Inc., made almost $6.5 million for the year, which was undoubtedly more money than poor Willy Loman ever dreamed of.

My Lateness Is Written in the Stars

Did you hear the one about the employee who was late for work because an astrologer said to avoid an accident by taking a different route?

That’s arguably not even the most bizarre excuse for being late to work that exasperated HR professionals shared with Chicago-based CareerBuiilder in a survey. A male employee claimed morning sickness, someone claimed “my fake eyelashes were stuck together,” and someone else said the “dog ate my work schedule.”

One-quarter (25 percent) of employees admit they’re late for work at least once a month, according to the survey. Harris Poll talked to 1,014 hiring and HR managers and 809 full-time employees about this topic between Nov. 28 and Dec. 20, 2017.

Check back every Thursday to get your latest HR Buzz.

To contact the reporter on this story: Martin Berman-Gorvine in Washington at mbermangorvine@bloomberglaw.com