What you need to know this week about workplace trends, surveys, and reports.

Can You Trust HR?

It’s often the case that human resources professionals think they are doing yeoman’s work while many of their colleagues in other departments would beg to disagree, but the disparity is especially great on the hot-button topic of sexual harassment.

Some 94 percent of male HR professionals and six in 10 female HR professionals believe their departments handle sexual harassment complaints effectively, while only 48 percent of non-HR male employees and 26 percent of non-HR female employees agree, the Institute for Corporate Productivity (i4cp) found in a survey. On the broader question of whether HR can be trusted to handle “sensitive issues” effectively, 73 percent of HR men think so and 60 percent of HR women agree, but the proportions of non-HR men and women who agree are 46 percent and 56 percent, respectively. 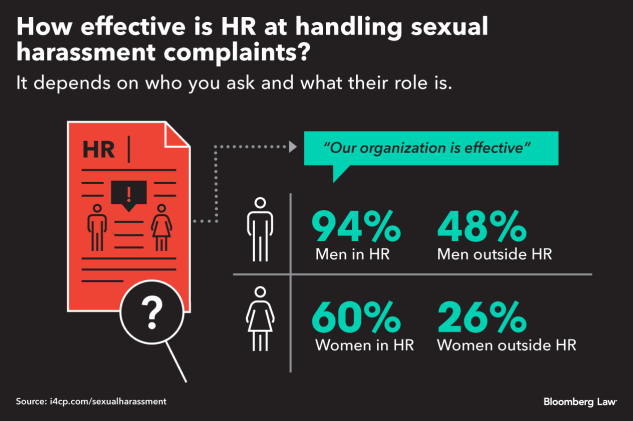 Some 43 percent of the 366 respondents to i4cp’s online survey identified themselves as directors or higher rank, such as vice presidents, C-suite executives, or partners. Most were from large, majority North American organizations, with just over half (50.2 percent) employed by companies with workforces of 5,000 or more, Lorrie Lykins, i4cp’s managing editor and vice president of research, told Bloomberg Law in a Feb. 5 email.

Afraid to Ask for More Money?

Many job candidates will shake hands on whatever compensation package they’re offered rather than try to negotiate it, even in a tight labor market where they might have an advantage in bargaining with their potential new employer.

Close to half of men (46 percent) but only one-third of women (34 percent) said they negotiated their current salary, according to a survey by Menlo Park, Calif.-based staffing firm Robert Half. People age 18 to 34 were more likely (45 percent of both genders) to have bargained over salary than their older peers. And of all U.S. cities, those in New York were most likely to have done so (55 percent).

Somebody Needs to Coach Dilbert

Scott Adams’s popular comic strip “Dilbert” stars a grumpy, depressive tech guy with poor social skills, and many employees who have run-ins with their organization’s IT departments would swear the portrait is based on reality.

About two-thirds (67 percent) of HR professionals responding to a survey said they have rejected tech candidates solely because they lack soft skills, and yet only 59 percent of employers further train their IT hires in this area after bringing them on board, consultancy West Monroe Partners said.

This can be a problem, as “43 percent of business people say they’ve experienced collaboration-based issues working alongside their technology counterparts,” the consultancy said, based on a survey it conducted last fall among 600 HR professionals and 650 full-time non-HR, non-IT employees.

The generation whose slogan used to be not to trust anyone over age 30 is deeply distrustful of the working habits of today’s youth.

Four in 10 baby boomers think that members of Generation Z, born between 1995 and 2010, will make the working world worse, while more than one-third (34.18 percent) of the younger folk think boomers are standing in the way of younger generations, according to a survey of 3,890 job seekers carried out Dec. 16-19 by recruitment firm Nexxt.

In an even unkinder cut, 40 percent of parents of Generation Z children warned that the group is lazier than the immediately preceding “millennial” generation, and only 32 percent of these parents thought their children’s entry into the workforce would improve it.

Check back every Thursday to get your latest HR Buzz.

To contact the reporter on this story: Martin Berman-Gorvine in Washington at mbermangorvine@bloomberglaw.com

To contact the editors responsible for this story: Jo-el J. Meyer at jmeyer@bloomberglaw.com