A House subcommittee approved a bill that would increase 2020 discretionary spending for the Labor Department and the National Labor Relations Board.
Photographer: Zach Gibson/Getty Images

Nearly 400 National Labor Relations Board employees March 15 asked lawmakers to save the agency from budget cuts they say will water down rights for workers who have nowhere else to turn.

The Trump administration’s request to trim NLRB funding by 9 percent next year would stifle the board’s ability to enforce protections for workers, unions, and businesses, the group of agency employees said to leaders of appropriation and labor committees in Congress. The agency plays a central role in overseeing union elections and resolving unfair labor practice complaints. Federal law requires those disputes go through the board, rather than the courts.

“The Administration’s proposed austerity measures will further reduce the NLRB’s footprint across the country, and inevitably leave the public further in the dark about their rights under federal labor law,” the employees, who represent about 25 percent of the agency’s nationwide workforce, wrote. “Given the rising tide of income inequality and enduring wage stagnation throughout the country, the public should be fully informed of their workplace rights, especially those enforced by this agency.”

NLRB General Counsel Peter Robb has cited the proposed cuts—and still-uncertain funding levels for the rest of this year—to justify talk about trimming some fat at the agency, including by cutting jobs and overhauling its regional director system. Robb has asked for input on those suggestions, as well as proposals to change the way the agency processes cases. The suggestions have drawn sharp criticism from current and former regional directors, unions representing NLRB workers, and some attorneys with business before the board. 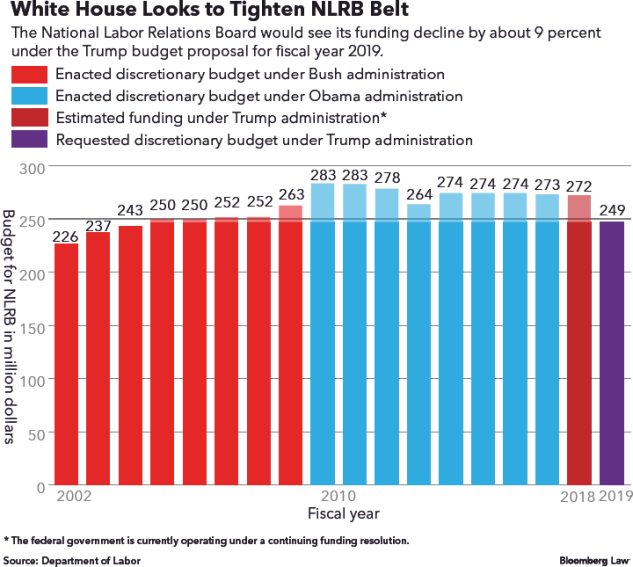 Robb told a group of lawyers in New York last month that the NLRB hasn’t changed many of its investigative and other processes since the early 1980s, despite a steady decline in the number of cases the board handles each year. He said some of the proposals, which include stripping regional offices of some of their autonomy, installing regional supervisors with a direct line to the general counsel, and making it easier to drop or settle cases, are meant to streamline operations.

The NLRB and other federal agencies are currently funded by a continuing resolution, set to expire March 23. Congress is widely expected to eventually extend that funding through the rest of the fiscal year, giving the board somewhere near the $273 million in funding it received last year. The board is operating under a reduced budget of $258 million until this year’s funding is resolved.

The NLRB employees are emailing the letters to lawmakers and their staffs and hand-delivering copies to congressional staffers in cities including Seattle and Boston. The group, which includes some managers, signed the letters in their personal capacities.

“All of us were terrified that our co-workers would lose their jobs and that the agency would be rendered pretty much ineffective, at least in some areas of the country,” John Mickley, an attorney in the NLRB’s Brooklyn, N.Y., field office, told Bloomberg.

Robb told NLRB regional directors shortly after he was sworn in last year that he’s considering shrinking field operations. The options discussed include combining certain field offices, stripping the agency’s regional managers of their senior executive status, and shifting more decision-making to Robb’s Washington office. Although some critics have suggested that the moves are meant to root out officials who may not be on the same page with Robb, the general counsel has maintained in public comments that the proposals are a reaction to the budget.

The reorganization could mean NLRB officials in Washington have more of a direct hand in local office investigations and decisions. Local interaction among workers, unions, businesses, and the regional directors in nearby offices handling cases is often touted as a hallmark of labor dispute resolution.

Robb is also considering a series of possible changes to the way the agency processes unfair-labor-practice and union-representation cases. That includes shortening investigation times, imposing strict deadlines on parties in cases, and emphasizing settlement.

“This strikes me as different from what has occurred with other Republican general counsels,” Swirsky said of the internal response to the moves. He said agency employees are concerned about being able to support the NLRB’s mission and worried that “they are being seen by senior leadership as a part of a problem.”

“They may perceive themselves as being seen as part of the swamp and the administrative state,” Swirsky said.

Mickley said the employees were inspired by workers at the Labor Department, who petitioned against fast-food CEO Andy Puzder’s nomination for labor secretary last year. Puzder eventually withdrew from consideration for the job following waning support from some Senate Republicans.

“We never would have done this if the employees at the Department of Labor hadn’t drafted the letter opposing Andy Puzder’s nomination early last year,” Mickley said. “The contents of the goals of the letter were very different, but the idea was the same: the workers of the agency care deeply about the work that they do and will stand up and speak out if there are severe threats to our ability to do that work.”

To contact the reporters on this story: Chris Opfer in New York at copfer@bloomberglaw.com; Josh Eidelson in Washington at jeidelson@bloomberg.net