“What are you giving up for Lent?”

It’s a common conversation topic this time of year, the 40-odd days that run from Ash Wednesday in February to the eve of Good Friday at the end of March. Cutting out sweets is a familiar option. A rising trend is to stay off social media. Traditionalists stick to the established choice of forgoing meat on Fridays.

But what to do when employee’s religious practices conflict with the person’s work duties? That question applies well beyond the six-week Lenten season.

Religious bias complaints to the federal agency charged with enforcing federal anti-discrimination law in the workplace have increased over the past decade. 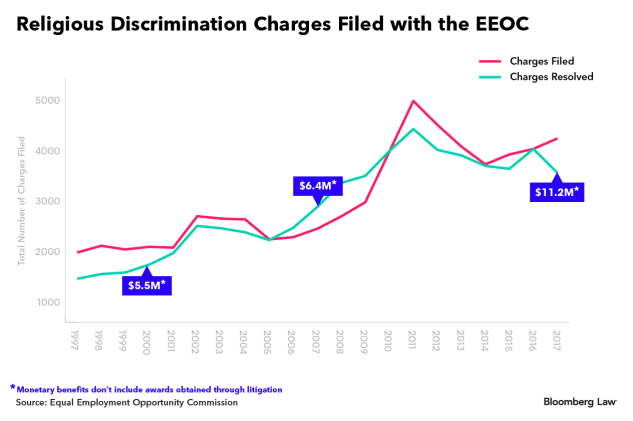 Title VII of the 1964 Civil Rights Act requires employers to provide a reasonable accommodation for an employee’s request as long as that accommodation would not cause undue hardship on the company. The complication is that one size doesn’t fit all, and what looks reasonable in one instance won’t in the next.

Case in point: The U.S. Court of Appeals for the Tenth Circuit in January reversed a district court’s grant of summary judgment without a trial to cereal producer Kellogg USA. The opinion ordered further proceedings to determine if the shift-swaps offered to Seventh-day Adventist employees were reasonable and whether further accommodations would have been an undue hardship.

“The takeaway from the Tenth Circuit’s opinion is that district courts need to actually engage with the facts of each case that comes before them,” says Todd McFarland, associate general counsel for the General Conference of Seventh-day Adventists. The Conference is involved with the Kellogg case, which is re-set for trial this September. “Hopefully, they’ll get the message.”

One religious practice that crops up in many religions is fasting.

“Fasting is the act of choosing not to do something so that we can draw our attention towards God. By disciplining the body and the mind, we practice self-control and reflection,” the Rev. Richard Mosson Weinberg, a spokesperson for the Episcopal Diocese of Washington, D.C., told Bloomberg Law.

Weinberg says the Christian practice of fasting during Lent has its roots in Judaism, which also practices fasting on certain holidays. Jews recently observed a day of fasting before celebrating the feast day of Purim, which fell on March 1 this year.

Islam, the third of the Abrahamic religions, prescribes strict rules for fasting during the month of Ramadan, the ninth month of the Islamic calendar. For 2018, Ramadan will run from May 15 to June 14.

Jainism, Hinduism, Buddhism, and the Bahá'í faith are other major religions that encourage or require fasting throughout the year. For most faiths, abstaining from food or drink for a period of time is meant to guide the faithful to realign their spiritual life.

Fasting could affect an employee’s stamina, mood, and ability to attend work events where food and drink will be served.

Charges on the Rise

Data show that religious discrimination charges filed with the U.S. Equal Employment Opportunity Commission are increasing. The EEOC administers Title VII, which prohibits a variety of discrimination in the workplace.

The EEOC may take up an aggrieved employee’s case on their behalf after reviewing their complaint. Or the agency may issue the employee a Notice of Right to Sue. That notice tells an employee that they have satisfied their obligation under Title VII to first contact the EEOC and now they are free to file a lawsuit in court.

McFarland, who represents Seventh-day Adventists who believe they have suffered religious discrimination, says the increase in filed charges is likely attributable to post-Sept. 11 charges brought by Muslim employees and to conflicts between employers and employees over required dress codes and grooming standards.

Multiculturalism is on the rise in the United States, he pointed out to Bloomberg Law, and that trend may be butting up against companies aiming to be leaner and more efficient. The result, he said, is that local managers may feel as though they have less leeway to grant an employee’s request for workplace accommodations. 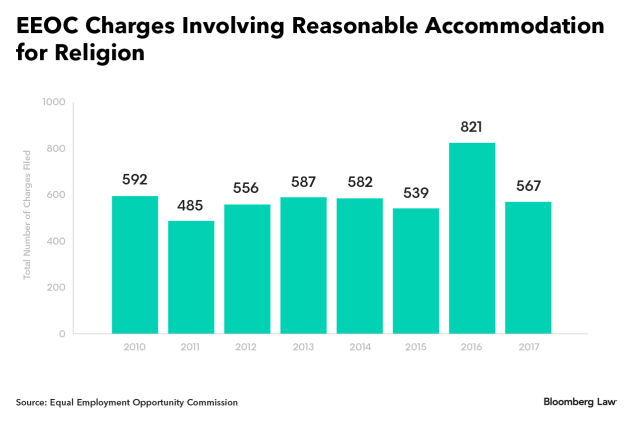 Charges that an employer has inappropriately denied an employee’s request for reasonable religious accommodations have held steady since 2010. The EEOC charges have remained near 500, save for a spike to 821 reasonable accommodation charges filed in 2016.

Employers are more likely to have religious accommodation policies in effect today as compared to 10 years ago, Tracey Wallace, a partner at Jackson Lewis in Dallas, told Bloomberg Law. But if a policy isn’t followed, all the work put into creating it is for naught.

Each time an employee approaches their manager with a request, it’s important for the employer to “really sit and think through what an undue hardship would be, and what a reasonable accommodation could look like,” she said.

“Rather than denying a request right off the bat because it complicates the schedule, sitting down for a good-faith discussion with employees can avoid issues with the EEOC in the long run,” Wallace said. “It’s not necessary that an employer agree to a specific request, but it will help in understanding an employee’s needs and provide an opportunity to work towards a solution that works for everyone. And if you get sued by the EEOC, they’re going to want to see that you’ve done that analysis anyway.”

A recurring concern for employers in the shift-work industry, according to Wallace, is the effect accommodating requests will have on the daily functioning of restaurant kitchens and retail locations. So it’s important for employers to educate their shift supervisors on how to acknowledge and negotiate requests for accommodations and when to send an employee to HR.

McFarland agrees that communication is important. But he adds that HR officials and management need to have a continuing conversation that flows in both directions. Negotiating accommodations will change from employee to employee, situation to situation. By approaching each request anew, employers can reach their goal of treating all of their staff equally, even if all accommodations are not the same.

Employees who request accommodations for fasting—or observing the Sabbath in the case of the Seventh-day Adventist plaintiffs in the Kellogg case—just “want to keep their jobs, and they want to keep their faith,” McFarland told Bloomberg Law. Ultimately, he says, they’re like everyone else—trying to strike a balance.

To contact the reporter on this story: Porter Wells in Washington at pwells@bloomberglaw.com