Georgetown University signed a first contract with newly organized graduate student workers that will boost their pay 12% to 15% in the first year.
Photographer: Alex Wong/Getty Images

Wages for union-represented workers are holding steady this year, though the average first-year increase is lower than earlier in 2020.

The overall average is at 3.3% for the third biweekly period in a row, according to the latest update from Bloomberg Law’s database. This is the first time all year that it has stayed the same for more than a month.

“It’s surprising that, amid all of this economic upheaval, this is the time that pay raises show some stability. Unfortunately for organized labor, the average is settling down at the low end of the spectrum,” compared with earlier this year, Bloomberg Law analyst Robert Combs said.

About 1.6 million people in the U.S. have contracted Covid-19, the disease caused by the coronavirus, with more than 93,000 deaths as of Friday morning, according to the Centers for Disease Control and Prevention. The disease has led to mass layoffs and strained businesses still in operation as they work to comply with federal, state, and local social distancing guidelines and mandates.

The high point for union wages in 2020 came in February, when the average first-year increase was 3.8%. It looked then like this year might feature higher pay increases than the previous two calendar years. The year-end average for 2019 was 3.3%, while 2018 ended with an average increase of 3.4%.

About 16.4 million workers in the U.S. are covered by union contracts. The 2020 figures are based on 309 contract settlements added to the database since the beginning of the year. Twenty-nine settlements were added in the most recent biweekly period ending May 20. 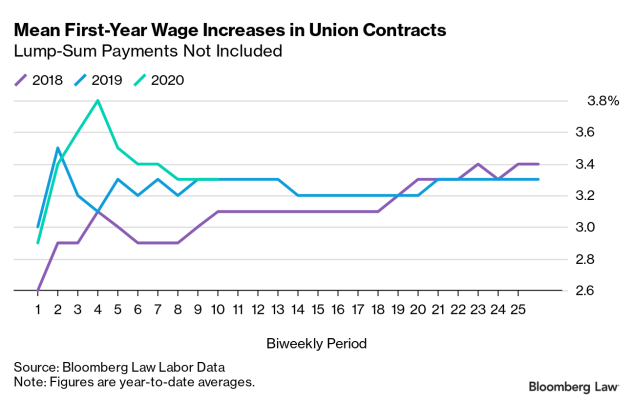 All sectors showed a lack of movement in the most recent update.

Nonmanufacturing’s average rose to 4.1%, from 3.9% for the previous biweekly period, but that was mostly because of a couple of high-paying “outliers” among the newly added contracts, Combs said.

The Illinois Association of Health Care Facilities is giving Service Employees International Union-represented nursing home workers statewide an average 20% raise, plus hazard pay during the pandemic. Also, Georgetown University signed a first contract with newly organized graduate student workers that will boost their pay by 12% to 15% in the first year.

Most of the rest of the records entered during this biweekly period have been more in line with recent weeks, Combs said.

The average first-year wage increase with lump-sum payments, such as bonuses included, also has stayed in a holding pattern. It is at 3.6% for the third straight biweekly period, slightly behind 2019’s 3.7% average.

To contact the reporter on this story: in Washington at llabrecque@bloomberglaw.com