America’s state and cities will likely need to sell billions of dollars of short-term debt to keep running as the fallout from the coronavirus deals a massive hit to tax collections.

With local economies grinding to a virtual halt and tax-filing deadlines pushed back until July, governments across the country are likely to face severe financial strains during a time of the year when they’re usually flush with cash.

In New York, where the pandemic is projected to add as much as $7 billion to the budget deficit in the current fiscal year, Budget Director said on April 1 that the state has “no choice but to issue short term borrowing to bridge the gap” for the three months until annual income-tax payments are due. Rhode Island is weighing whether to borrow $300 million. may borrow as much $350 million as toll revenue from drivers plummets.

“It’s very likely to see an uptick in the short-term note borrowing as these issuers await their revenue to come through,” said , a managing director at in Philadelphia. “Local governments have a much smaller revenue base and tend to operate with lower fund balances and available cash.”

Such short-term borrowing climbed to a record $67 billion in the aftermath of the last recession, when the contraction rippled through tax collections long after it began. The unprecedented speed and scale of the pandemic-induced slowdown is delivering a more immediate financial hit, with the widespread closure of businesses decimating sales-tax revenue and throwing millions of Americans out of work since last month. 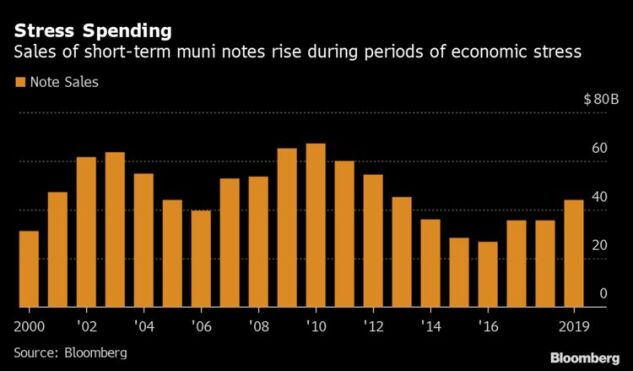 The ability of states and cities to borrow on a massive scale this time has been complicated by unusual volatility in the $3.9 trillion municipal-bond market after investors pulled out record sums of cash amid concern that the crisis will create financial distress for hospitals, convention centers and others that have issued debt.

That retreat has caused the pace of debt sales to tumble as the biggest deals are put on hold. Since March 16, only about $6 billion of new state and local government bonds have been issued, a drop of 70% from the same period a year ago, according to data compiled by Bloomberg.

Richard Li, the public debt specialist for Milwaukee, Wisconsin, on April 2 tried unsuccessfully to auction of nine-month notes to cover the temporary cash shortfalls it was anticipating before the virus struck. His office received just two bids, both from separate arms of , and rejected them both because the cost was higher than expected. The city opted for a loan with at an offer closer to the market rate, Li said.

“The market is so locked up and it just can’t figure itself out,” Li said.

That’s left state and local government officials looking for the to utilize the power to buy municipal debt that it was given under the $2 trillion economic stimulus program. The , a lobbying group for municipalities, last week urged the central bank to create a low interest-rate loan program for governments facing cash crunches from the virus, saying a flood of short-term borrowing could destabilize the public market.

The Fed has already extended some aid by allowing short-term debt to be pledged as collateral under its money-market fund lending program, a step that helped arrest a steep jump in interest rates last month. But it has yet to spell out how -- and whether -- it will use the powers extended under the stimulus law.

“That’s the type of activity that could help the market heal faster than it would on its own,” he said.

To contact the reporter on this story:
in New York at dmoran21@bloomberg.net

To contact the editors responsible for this story:
at ecampbell14@bloomberg.net