Congress may act amid reports the Trump administration is backing off a promise to crack down on teen vaping.
Photographer: Justin Sullivan/Getty Images

Reports the Trump administration is backing off a promise to crack down on teen vaping may spur Congress to act on the issue instead.

Democratic leaders in the House and Senate say they’re worried President won’t follow through on a proposal to ban many flavored e-cigarette products. They say Congress should pass legislation meant to combat the rising number of teenage vapers.

“It’s unacceptable that President Trump is putting politics over public health by breaking his promise to ban flavored e-cigarettes,” Sen. (D-Va.) said Monday in a statement. “As the epidemic of youth e-cigarette use hurts more and more American families, there’s an urgent need for bold action to combat this crisis.”

Kaine is pushing his legislation () to raise the age to buy tobacco products to 21. 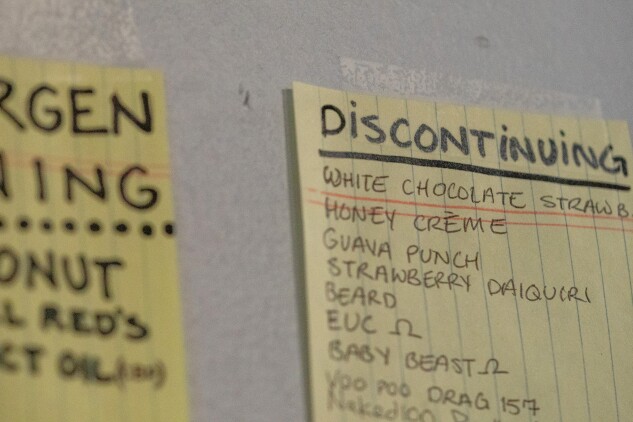 A note listing flavor-related juices that have been discontinued due to a possible ban is displayed at a vape store in Seattle, Washington, U.S., on Monday, Sept. 30, 2019.
Jovelle Tamayo/Bloomberg

“I’m concerned they’ll backtrack on some of the things they said they’d do,” Pallone said. “We want to go further than that anyway.”

In response to reports that teen vaping has risen dramatically in recent years, Trump promised to ban certain flavored e-cigarette products and has floated the idea of raising the age to buy vaping products to 21.

The companies that make e-cigarettes say they’re supposed to be tools that adult smokers can use to quit using traditional tobacco cigarettes. However the products are popular among teenagers and lawmakers accuse some major players in the industry, such as Juul Labs Inc., of targeting teenagers in their marketing, particularly for flavored vape products.

Further complicating the matter is a lung illness that’s been found in more than 2,000 people in the U.S. connected to e-cigarettes.

However, in recent weeks the administration has signaled it’s backing off some of those ideas and delayed action.

The Energy and Commerce Committee will mark up a bill () Tuesday that would raise to 21 the minimum age to buy tobacco products and ban some popular flavored tobacco products, such as mint and menthol. It would also require graphic health warnings on cigarette packs and advertising.

The bill has been criticized by House Republicans who say it goes too far, and some Democrats from states home to big tobacco companies who don’t want to ban menthol cigarettes.

Senate leaders like Health, Education, Labor and Pensions Committee Chairman (R-Tenn.) have instead urged the Food and Drug Administration to act on the issue of flavored e-cigarettes while supporting raising the age to buy tobacco products to 21. Alexander said last week he still wants to leave it in the FDA’s hands because they have “clear authority” over e-cigarettes.

Rep. (D-Ill.) sent a letter Monday to the White House’s Office of Information and Regulatory Affairs asking about the status of the FDA’s proposed vaping regulation and why it’s being held up.

“The strong promises made by the President and his Administration to address the youth vaping epidemic were incredibly encouraging,” Krishnamoorthi wrote. “Now, however, the delay in finalizing the Administration’s compliance policy raises deep concerns.”

To contact the reporter on this story: in Washington at aruoff@bgov.com

To contact the editors responsible for this story: at phendrie@bgov.com; at jnicholson@bgov.com