The great Christmas tree shortage of 2017 is real and it could be Nutella’s fault. Or, more specifically, it could be partly because of China’s growing taste for the iconic chocolate-hazelnut confection.

In some parts of the U.S., Christmas tree lots emptied out sooner than usual, and the places lucky enough to still have supply are charging a pretty penny. According to survey data commissioned by the National Christmas Tree Association (NCTA), prices have increased over 100 percent since 2008.

“I know a lot of tree sellers who got completely skunked this year,” said Lindsay Schramm, co-owner of North End Organic Nursery in Boise, Idaho, which sells wreaths and trees. “Even our local Costco is sold out, same with Home Depot, and Fred Meyer [grocery chain].”

[Listen to Bloomberg Environment’s Parts Per Billion podcast about why it’s been so hard to find a Christmas tree this year.]

Normally at this time of year, Schramm told Bloomberg Environment that she’d still be going strong selling trees, but in recent years she’d had trouble locking down suppliers over the summer.

“Almost every grower that I worked with in the last nine years is out of business,” she said.

Many of the farmers she buys trees from are now planting hazelnuts instead, she said. 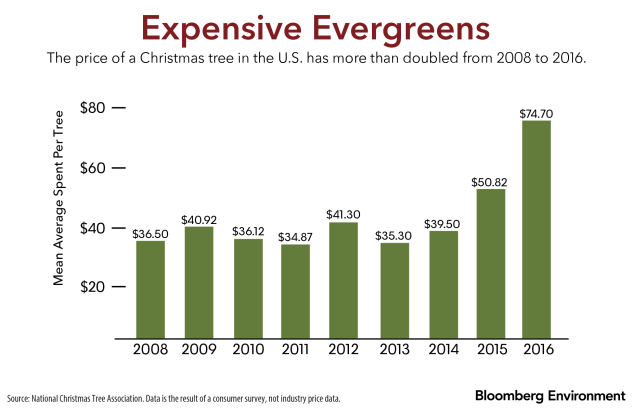 Oregon is the largest producer of Christmas trees in the U.S. by far, producing some 5.2 million trees last year. North Carolina is the second-largest producer with 3.5 million, according to the Pacific Northwest Christmas Tree Association.

But those numbers are in the process of changing. Fueled by a booming export market, hazelnuts’ acreage is expanding all over North America.

Schaefer said the decision to diversify into hazelnuts was based on two primary factors: One was the low prices tree farmers saw during an 15-year period of oversupply, from around 1998 to 2014. The other was ever-increasing input costs for things like labor and fertilizer.

“That’s probably the biggest factor,” said Casey Grogan, a production manager at Silver Bells tree farm, in the foothills of the Cascade Mountains.

“Christmas trees are extremely labor intensive,” Grogan told Bloomberg Environment. “When we ramp up at harvest time, we could have 50 guys running around.”

On top of that, Grogan said a Christmas tree can take seven to 10 years to mature before it’s ready to be sold. Hazelnuts, by comparison, can start producing a crop in three or four years—and you don’t have to cut them down. 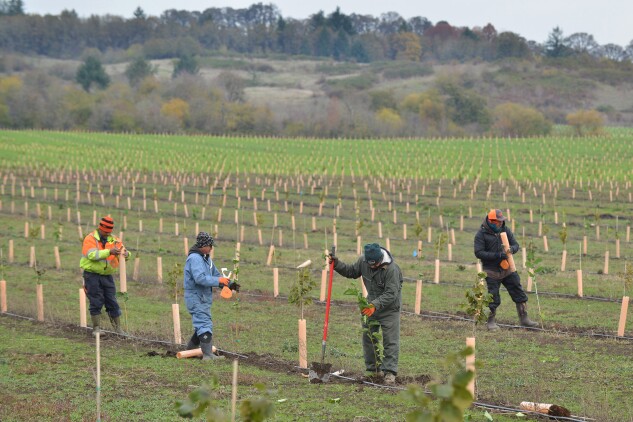 Demand for premium chocolate is expanding rapidly in China as the country experiences rapidly rising incomes and increased consumption. Italy’s Ferrero SpA, the world’s third largest chocolate supplier, and maker of Nutella, opened a $300 million, state-of-the-art factory in Hangzhou in 2015.

But according to the National Christmas Tree Association, the main factor in the recent supply shortage has more to do with the Great Recession than Nutella or hazelnuts.

“Christmas tree sales started a downward turn during the recession, and so did tree prices,” said Tim O’Connor, the association’s executive director. His group represents more than 700 tree farms, along with 29 state and regional associations and more than 4,000 affiliated businesses.

In a statement to Bloomberg Environment, O’Connor noted that the combination of decreased demand and lower prices simply created an untenable situation.

“Meaning, farmers didn’t have the revenue to plant as many trees as they would have if sales had been better. The result, 10 years later, is today’s smaller supply.”

While the growing popularity of Nutella in China isn’t the only reason U.S. farmers are planting more hazelnuts, some say it does have the potential to swing the needle in a big way.

“Nutella has really broken new ground for hazelnut farmers all over the globe,” said Larry George, president of George Packing, a hazelnut processor in Newberg, Ore. 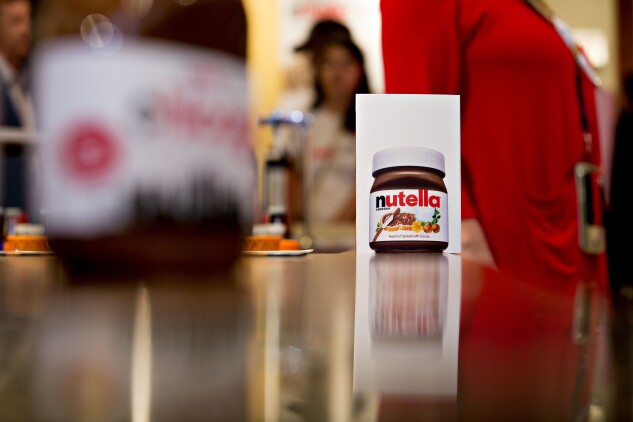 A jar of Nutella spread sits on a table during the grand opening of the Ferrero SpA Nutella Cafe in Chicago on May 31, 2017.
Photographer: Daniel Acker/Bloomberg via Getty Images

While Oregon accounts for basically all of the North American production of hazelnuts, it only factors in roughly 4 percent of global supply, according to data from the Hazelnut Industry Office.

However, if planting rates continue as they are, George said that Oregon could eventually increase that figure to about 15 percent of the global market.

“If tastes and preferences continue like they have been, our biggest problem won’t be demand, it will be supply, just getting trees in the ground,” said George.

According to industry statistics, there have been years where as much as 85 percent of the U.S. hazelnut crop has gone to China, where it’s sold as an in-shell product, similar to pistachios.

Turkey produces 70 percent of the world’s $2.8 billion hazelnuts and Ferrero is one of its biggest customers. In recent years the company has sought to diversify its supply chain by developing hazelnut cultivation in other countries, such as Chile, Azerbaijan, and Georgia, according to a statement provided to Bloomberg Environment.

Last October the Canadian government announced a joint-funding partnership with Ferrero to test tree varieties in Ontario. The company hopes to see farmers plant 25,000 acres of hazelnut trees by 2027, up from roughly 400 acres today.

As far as Christmas trees are concerned, 2017 is shaping up to be a banner year, possibly providing a note of caution to farmers thinking about swapping out one tree for another.

“So many people have gotten out the business, I think we’re finally past that oversupply that we used to have,” said Grogan of Silver Bells tree farm.

“Now that prices are going up again, those of us who are left, probably aren’t going into hazelnuts … but I’ve definitely thought about it,” he said.

To contact the reporter on this story: Adam Allington in Washington at aallington@bloombergenvironment.com