It’s bad news for lawyers, but good news for almost everyone else: The states that get water from the Colorado River said they won’t sue each other as often as they used to.

These seven Western states have been eager to avoid litigation when a dispute arises over how to divide the river’s water, according to attorneys and other observers.

The reason behind this shift could be the recent history of droughts and accompanying fears of mandatory restrictions on water use, several said.

These fears are motivating the states to reach new agreements and try new conservation tactics, according to Shanti Rosset, Colorado River program manager at the Metropolitan Water District of Southern California, which serves 19 million people in the Los Angeles and San Diego areas.

“We’ve moved from a position on the river of acrimony to a situation where we’re really willing to take risks,” Rosset said at a recent water resources conference in Washington. “It seems like we’re really off of the litigation track, which is where we were for decades.”

‘Water Is for Fighting Over’

An oft-repeated quote about water in the West is “Whiskey is for drinking, water is for fighting over.”

The latter part of that quote also happens to be the title of John Fleck’s 2016 book on disputes over the Colorado River. But the idea that seven Western states—Arizona, California, Colorado, New Mexico, Nevada, Utah, and Wyoming—will never stop fighting each other for the last drop is an outdated myth, he said.

Instead, the states’ leaders have realized that it’s in no one’s interests to have judges decide who gets how much water, he said.

“Litigation is just a bad solution to problems,” Fleck, director of water resources at the University of New Mexico, told Bloomberg Environment. “When you hand it off to courts, you create an enormous risk of uncertain results. Negotiated solutions are far better ways to provide predictability.”

Another factor driving the states to cooperate more is the region’s increasingly dry weather. Both California and Arizona experienced some level of rainfall shortage at the end of last summer, before struggling through the unusually wet winter of 2017, according to federal monitoring data.

“It was worse than anyone could have imagined,” Rosset said.

If 2017 hadn’t been as wet, and water levels at Lake Mead, the nation’s largest reservoir, had dropped a few more feet, mandatory federal water restrictions would have gone into effect. 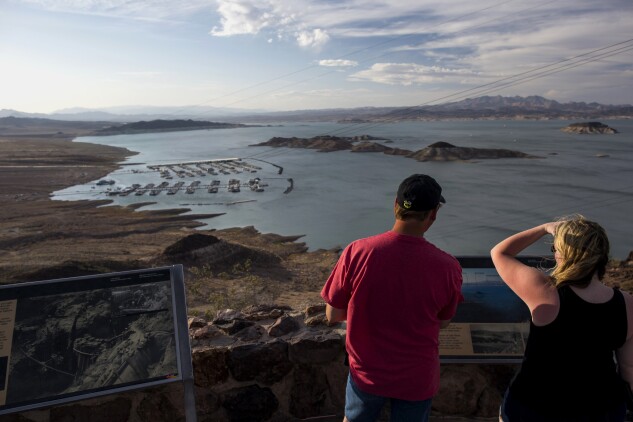 A couple looks out over Lake Mead in Boulder City, Nevada, in 2015, as the reservoir declines to 40 percent of capacity.
Photographer: David Paul Morris/Bloomberg via Getty Images

“The fear of a shortage declaration happening is one the big motivators for taking action,” Fleck said.

That’s especially the case in Arizona, which stands to lose the most water should a shortage occur.

The Grand Canyon State could lose up to half its allocation of water from the Colorado River if another severe drought hits, according to Lee Storey, a water rights attorney in Phoenix. That’s because those allocations between the river states were devised decades ago, long before Arizona was as populous as it is now and long before high quality data existed about the river’s flows.

This precarious situation has been exacerbated in recent years by weather fluctuations caused by climate change, prompting Arizona to look into innovative water conservation tactics, Storey said. The state, for example, is in a public-private partnership that pays a Native American tribe for the water it doesn’t use.

The partnership between Arizona and tribal leaders is an attempt to keep more water in Lake Mead, the region’s main reservoir, and avoid an official shortage declaration. But this essentially means the state is trying to use less water now so it can avoid water restrictions in the future.

“Arizona is voluntarily using less Colorado River water to avoid a shortage,” Fleck said. “The psychology of that is fascinating.”

Other states also have projects that help them avoid litigation. California has pursued its own conservation measures, including paying farmers $400 an acre to fallow their fields, according to Rosset.

Nevada has essentially created a checking account for water that it stores in Arizona reservoirs and can withdraw later.

And the U.S. recently reached an agreement with Mexico that would see the southern neighbor get less water from the river in the event of a shortage.

“What has really tipped the table in this scenario is climate change,” Storey said at the Oct. 12 water resources conference.

Keeping the water allocation issue out of the courts is probably a good thing, according to Douglas Kenney, a senior research associate at the University of Colorado Law School in Boulder.

It would be impossible for judges to develop and implement the innovative conservation measures that the states are now pursuing on their own, he said.

“A sophisticated attempt to avoid a shortage is something that requires a lot of negotiation, cooperation, and a lot of experimentation,” he told Bloomberg Environment. “With litigation ... you take any sense of self-determination and hand it off to a judge who probably doesn’t understand water issues very well.”

Unexpectedly, declining water supplies have improved, not worsened, relationships among parties, according to Kenney.

Ultimately, Kenney said it’s likely that Lake Mead will drop below its thresholds and that a shortage will be declared within the next few years, despite conservation measures the states enact.

However, unless the region undergoes a decades-long mega-drought, he doesn’t think the western states will be summoning their attorneys any time soon.

“I don’t think [a shortage] unravels the current state of cooperation,” Kenney said. “It wouldn’t be pleasant, but it would be manageable.”

To contact the reporter on this story: David Schultz in Washington at dschultz@bloombergenvironment.com