The Biden administration is on track to propose by the end of July new limits on the emission of greenhouse gases from automobiles that are strong enough to meet “the urgency of the climate crisis,” according to EPA Administrator .

“We need to go as far as we can to meet the demands of the day,” Regan said in an exclusive interview Tuesday with . “The science indicates we have a short window in time to reverse the path that we’re on and mitigate against certain climate impacts.”

The U.S. Environmental Protection Agency is now rewriting a Trump-era regulation that relaxed limits on greenhouse gas emissions from vehicles through the 2026 model year. The issue is shaping up to be an early test of President ’s commitment to fighting climate change through ambitious greenhouse-gas controls, even when opposed by industry. 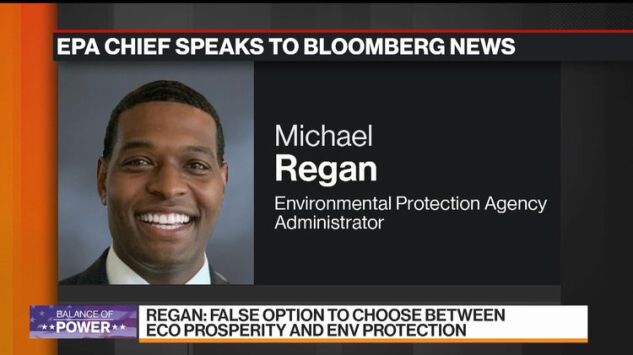 In the interview, Regan also highlighted California’s unique role in fighting pollution, the return of the U.S. to the Paris climate accord, the potential role of a carbon tax and the urgent need to replace hundreds of scientists shed by the agency under former President Donald Trump.

Regan signaled the EPA would not yield to pressure from automakers to water down tailpipe emissions requirements, given that the transportation sector is now the top U.S. source of planet-warming pollution.

The EPA also is set within weeks to formally issue its plans for a Trump-era rule that blocked California from setting its own vehicle emissions standards. Regan stressed Tuesday that he’s “a firm believer in the state’s statutory authority to lead, in California being the leader.”

Regan did not rule out future emissions requirements that create a de facto ban on new conventional, gasoline-powered automobiles, like an ordered by California Governor .

“We’re taking a strong look at what the science is urging us to do. We’re looking at where technologies are,” Regan said. “We’re marrying our regulatory policy and what we have the statutory authority to do with where the science directs us and where the markets and technology are.”

Weeks into his job leading the EPA, Regan is charged with implementing Biden’s environmental ambitions, including aggressive action to combat climate change and help communities long battered by pollution. The EPA is on the front lines of both fights, which will force Regan to navigate oft-competing interests of industry and environmentalists.

Regan, 44, won his confirmation to lead the EPA last month based largely on his reputation for on thorny issues as North Carolina’s top environmental regulator. But Regan said some issues are too weighty for compromise.

“I do firmly believe in consensus building. I believe in engaging stakeholders. I do believe that all voices should be heard,” Regan said. “But at the end of the day, EPA’s mission is to protect our natural resources and protect public health.”

Ultimately, Regan said, “the science, data, facts and the law will drive the decisions that we make,” Regan said.

Regan’s first task is rebuilding the agency, which shed an estimated 700 scientists during Trump’s tenure. He also needs to rebuild morale among EPA employees who remained, including many who said they were belittled under Trump and are still distrustful of managers who went along with the old regime.

“The secret sauce here is returning back to the agency’s original mission, which is protecting people and natural resources, and creating a welcoming environment that’s focused and centered around scientific integrity, ethics and values,” Regan said. “We believe that we will attract some of the talent that left the agency during the previous administration, but we also believe that we will be really attractive to new scientists, new engineers, new legal minds.”

Regan is trying to bolster scientific integrity at the agency, which public health and environmental advocates say was diminished over the past four years. In one of his first major acts, Regan last week of dozens of members of two scientific advisory committees that guide the EPA’s work -- a move designed to shrink the influence of industry and create a blank slate for rebuilding the panels.

Regan said there’s room for many voices on the committees, including experts from the industries EPA regulates. While he refused to explicitly rule out the addition of climate skeptics to the panels, he indicated not all viewpoints are welcome.

“We need individuals that believe in science, believe in the facts before us and are willing to roll up their sleeves and join the conversation about how this country can tackle climate change and do it in a way where we’re following the science, following the law and not sacrificing our global competitiveness,” Regan said. “Those are the types of individuals that we’re looking for.”

The Biden administration is relying heavily on U.S. environmental regulations to support an aggressive new Paris agreement pledge to slash the greenhouse-gas emissions driving climate change. Regan said the U.S. target, which is set to be unveiled later this month, will be bolstered by an array of EPA regulations targeting greenhouse gas emissions from oil wells, automobiles and power plants.

The EPA is “laser focused” on limiting releases of the potent greenhouse gas methane from oil wells and infrastructure, and plans to move aggressively to target emissions from power plants, Regan said. “EPA has a critical role to play in delivering on President Biden’s aggressive climate agenda to achieve a carbon-pollution-free power sector by 2035 and put the United States on path to a net-zero economy by 2050.”

The U.S. should employ a variety of tools to combat climate change, including possibly policies that address the financial risk tied to a warming planet, Regan said. The Treasury Department has elevated its focus on climate change under Biden, and Treasury Secretary has to delve deeply into concerns around climate-related risk.

“We’re having conversations with everyone about all of the levers that we need to pull in concert to not only protect ourselves from climate change impacts, but to position ourselves to be globally competitive and create jobs and be more resilient,” Regan said. “I see lots of opportunities and thinking more expansively about how we address climate change.”

But Regan said EPA’s regulatory authority shouldn’t be traded away in pursuit of new climate policies including a possible tax on carbon dioxide emissions that is drawing renewed interest from oil companies and lawmakers.

“Regulations alone won’t solve the problem,” but they are still key and can “complement some of these other tools that are being contemplated,” Regan said. “We are in conversations to ensure, whether directly or inadvertently, that any strategy moving forward to protect this planet from harmful greenhouse gas emissions does not discount EPA’s role in helping to protect the planet.”

To contact the editor responsible for this story:
at jmorgan97@bloomberg.net