Anyone can plant a tree. But knowing precisely when and where to plant can make all the difference to the quality of waterways like the Chesapeake Bay.

Enter the nonprofit Chesapeake Conservancy, which has made it a goal to use the latest technological tools to help reduce soil and nutrient pollution and restore the bay’s vast watershed, one square meter at a time.

Staff at the Annapolis, Md.-based nonprofit noticed that the existing Chesapeake Bay land-change model—which the U.S. Geological Survey had developed to track pollution releases across the watershed—contained out-of-date information about the locations of flowing water, vegetation patterns, tilled land, and new housing development.

The group initially experimented with mapping the changing topography at a pilot scale. Its success led the federal government’s Chesapeake Bay Program to contract with the nonprofit and the University of Vermont and WorldView Solutions Inc. to develop a high-resolution land cover project for the 64,000-square-mile watershed. 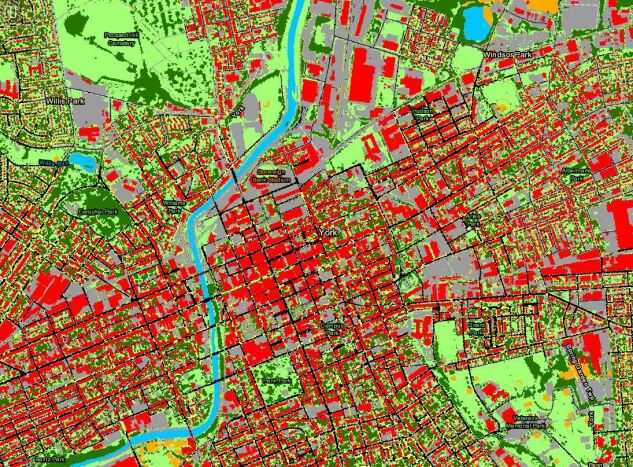 A close up of York, Pa., shows a view of the watershed land cover. Shades of green on the map represent shrubs, wetlands and tree canopies, while red depicts structures and black lines mark impervious roads.
Photo courtesy of Chesapeake Conservancy

Their goal was to map the bay’s emerging geography and harness the latest in satellite imagery, Agriculture Department reports, and Federal Emergency Management Agency floodplain maps.

The result, the Chesapeake Bay High-Resolution Land Cover Project, yielded maps that provide a high-resolution picture of the vegetation covering the bay watershed with square meter resolution, much more precise than the 30-square-feet resolution available previously.

The group then created the web-based application that enables farmers, property developers, and policymakers to determine with a few clicks where they can plant tree buffers and employ other tilling practices. It also tapped into Microsoft’s cloud computing platform, Azure, to see how fast and far this modeling could go.

The application proved useful for local and state officials in the six bay states—New York, Pennsylvania, Delaware, Maryland, Virginia, West Virginia—and the District of Columbia, and the more than 200 cities and counties that must locate, protect, and restore high-functioning landscapes that reduce nutrient and sediment loads entering the bay.

“We were able to exactly pinpoint where conservation practices will deliver most results in nutrient and sediment controls,” Jeff Allenby, conservation technology director for the Chesapeake Conservancy, told Bloomberg Environment.

The Chesapeake Bay Program, a federal-state partnership, combined the detailed land-cover model with zoning data from each county in the watershed.

In order to understand the sources and movement of nutrient and other pollution, “we needed both land cover data and land use data,” Peter Claggett, senior geographer and project manager of the land cover-land use modeling project with U.S. Geological Survey, told Bloomberg Environment.

Claggett and his team have been involved in mapping land use and land cover across the bay since 1984 to guide bay states in improving water quality and restoring fish habitat. The latest model, which is still in the review stage, would be used by the states during 2018 to 2025.

Meanwhile, the Chesapeake Conservancy has been tailoring its basic land-cover model for different applications within the bay watershed. It partnered with the York County Stormwater Consortium to create a customized web-based tool to streamline and standardize the data, calculations, and formatting of stormwater project reports that 44 participating municipalities submit each year.

The conservancy developed a York County Stormwater Consortium Best Management Practices (BMP) Reporting Tool to “identify, compare, and prioritize the most cost-efficient projects to help achieve water quality goals, and save time during the review process,” according to Pam Shellenberger, chief of the York County Planning Commission’s division of long-range planning.

In the Richmond area of Virginia, the conservancy adapted its land cover data for the local land trust so the trust could pinpoint which parcels should be given conservation easements.

“All it takes is a couple of clicks,” Allenby said.

A web-based application can be useful for smaller parcels, and farmers can access it on their smart phones. But for the entire bay, Allenby said, that system was too slow.

The Chesapeake Conservancy’s web-based application caught the eye of Microsoft lawyer Holly Evans, who sat on the nonprofit’s board. Evans connected the technology giant’s chief environmental scientist, Lucas Joppa, with Allenby. The result was a pilot partnership in 2014 using Microsoft’s Azure program to make calculations and visuals in minutes instead of hours.

Joppa said Microsoft was drawn to the Chesapeake Conservancy’s web-based application to change the way the bay’s environmental data is presented and applied.

“We were intrigued. We gave them our support in the form of a small in-kind grant to use our cloud computing platform,” Joppa told Bloomberg Environment.

Chesapeake Conservancy’s involvement with Microsoft came a year before the tech giant launched its AI for Earth grants program. The program was built on the premise that Microsoft’s AI infrastructure and applications can transform how the world monitors and responds to the ever-increasing scale and speed of global environmental change, Joppa said.

As one of the pioneers of the information age, Microsoft was in a position to invest in individuals and organizations, such as the Chesapeake Conservancy, that are looking for precise solutions to environmental problems, Joppa said.

AI can help analyze reams of data to answer “what is there, how much is there, and how fast is it changing?” he said.

To date, the technology giant has awarded $235,000 in grants to 20 applicants in 10 countries to push research in four areas—agriculture, water, biodiversity, and climate change. 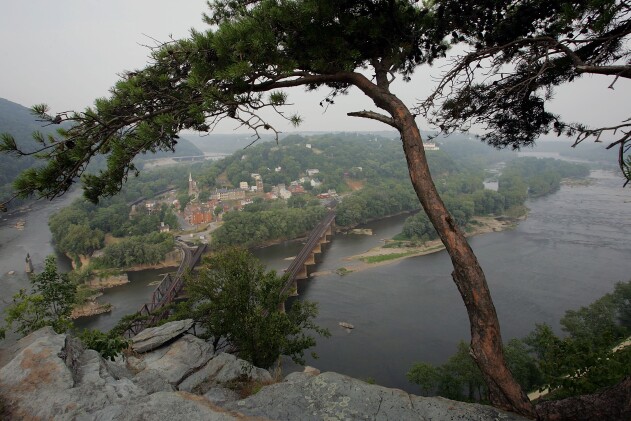 The Nature Conservancy, one of the grant recipients, is in the early stages of adapting the Chesapeake Conservancy’s land cover database to develop a stormwater model for Puget Sound in Washington state.

This model would identify the sources of pollution and track the path the pollutants take through freshwater to reach the marine environment, Zach Ferdana, program manager for The Nature Conservancy’s coastal resilience program, told Bloomberg Environment.

Such a model would enable communities to know where to install green infrastructure like tree canopies or porous pavements to reduce stormwater runoff impairment of the Puget Sound, Ferdana said.

In addition, The Nature Conservancy is developing interactive applications that use geographic information systems and cloud-based computing to assess climate change risks in collaboration with Microsoft and ESRI. ESRI is the Redlands, Calif.-based Environmental Systems Research Institute specializing in developing geographic information-based solutions.

Whether it’s assessing the resilience of coastal cities or lowering flood insurance for communities, cloud computing is allowing groups to tap into thousands of satellite images, hydrology maps, and other datasets to provide composite pictures for local, state, and federal planners, Ferdana said.

Unlike the conservation groups, the Chesapeake Bay Program has yet to use the Azure platform to upgrade its land cover-land use model, Claggett, the USGS land-cover modeling project manager, said.

The bay’s web-based land-change model is yielding results with 95 percent accuracy by making manual corrections to algorithms involved in processing, Claggett said. If Microsoft’s Azure can speed up the process with the same degree of accuracy, “it will be amazing, but we don’t know yet.”

Collecting the land cover data and integrating it with how the land is used for building homes, offices, or roads is a labor-intensive effort. The Chesapeake Conservancy has shown it can be done, and the goal is now to see how it can replicated in other parts of the country with impaired water bodies, Claggett said.

“We have armed the local governments to use their resources more efficiently,” Allenby said. “I think what we have done in the Chesapeake Bay is our Kitty Hawk moment.”

To contact the reporter on this story: Amena H. Saiyid in Washington at asaiyid@bloombergenvironment.com