Companies have started reporting their manufacture or imports of newly designated high-priority substances under the Toxic Substances Control Act—and paying EPA costs for evaluating the substances’ risk. Sidley Austin attorneys explain the risk evaluation process and how companies can strategically engage with EPA on the scope of risk evaluations.

For years, environmental compliance professionals in the manufacturing and energy sectors have thought of the Toxic Substances Control Act as applying primarily to the chemicals industry.

But more companies have recently found that they need to report their manufacture or imports of newly designated high-priority substances under 2016 TSCA amendments and potentially pay a share of EPA’s costs for evaluating the risk of those substances under EPA’s TSCA fees rule.

EPA has extended to June 15 the first deadline for reporting to EPA under the TSCA fees rule, which is applicable to all manufacturers and importers of the 20 high-priority substances designated in December 2019. But EPA has recently announced that it will miss the deadline for finalizing risk evaluations for 10 high-priority substances designated back in December 2016— which raises questions about whether EPA will miss other deadlines under the fees rule.

This article explains the risk evaluation process and how companies can strategically evaluate how to engage with EPA during the scoping process, their potential obligations to pay, and exemptions that may apply.

Congress amended TSCA in 2016, after which EPA started a years-long process of evaluating the risks of high-priority substances under TSCA section 6(b), 15 U.S.C. § 2605(b).

“High priority substances” are those that EPA concludes “may present an unreasonable risk of injury to health or the environment because of a potential hazard and a potential route of exposure under the conditions of use, including an unreasonable risk to a potentially exposed or susceptible subpopulation identified as relevant by [EPA].” (15 U.S.C. § 2605(b)(1)(B)(i).) EPA designated its first group of 10 high-priority substances in 2016 and added 20 more for the risk-evaluation process in December 2019. 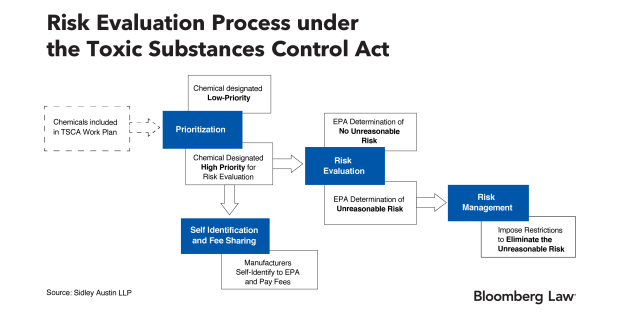 Most of the substances currently under risk evaluation are solvents, flame-retardants, or phthalates (plasticizers). EPA has stated that it intends to keep a minimum of 20 chemicals under review at any given time, although the current number of 30 chemicals under review is more than the agency plans to maintain. EPA provided draft scope documents for the most-recent 20 high-priority substances this month, with a deadline for public comment set for May 26 for one group of chemicals and June 8 for the next group. However, EPA Administrator Andrew Wheeler informed the Senate Environment and Public Works Committee that EPA will miss its upcoming deadline to finalize the first 10 risk evaluations for high-priority substances designated in December 2016. 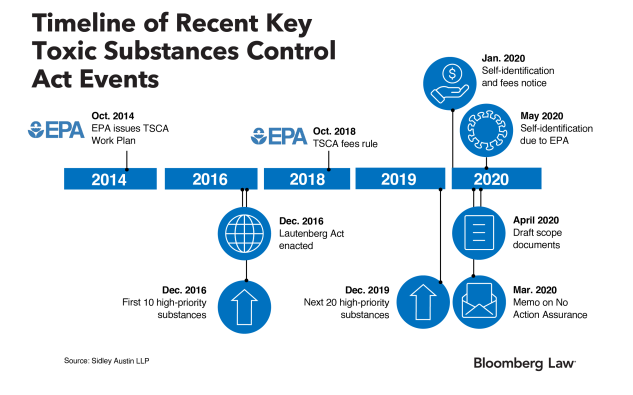 TSCA provides for EPA to collect associated fees (15 U.S.C. § 2625(b)), and EPA issued, in 2018, a TSCA fees rule that allows EPA to recover costs associated with conducting risk evaluations.

Under the fees rule, the $1.35 million fee generally is shared on a per capita basis among manufacturers of the high-priority substance, with modifications for small businesses. Small business concerns are responsible for 20 percent of the total fee, with the threshold number of employees ranging from 200 to 1,500 by industry NAICS code. Companies are permitted to form consortia, in which companies may re-allocate amongst themselves (e.g., by volume).

In January, EPA issued a notice requiring manufacturers and importers of high-priority substances to report to EPA and potentially pay a share of the risk evaluation costs, including preliminary lists of companies (one list for each of the 20 substances) that EPA believed were subject to the TSCA fees rule. Those lists range in length from a handful of companies to hundreds, collected from internal EPA records.

Due to the complex nature of determining whether companies fall within the fees rule for high-priority substances, with many companies raising concerns about delays from Covid-19, EPA extended the self-identification requirements for high-priority substances to June 15. With the first deadline quickly approaching, many will be watching how exactly fee-sharing and reductions for small businesses will play out.

Failure to self-identify could risk an EPA civil enforcement action that could potentially seek a maximum $40,576 per-day penalty for the number of days the importer failed to make a payment pursuant to the fees rule.

The provisions under TSCA section 6(b) and the TSCA fees rule do not include some of the standard exceptions to other provisions of TSCA, meaning that companies could be on the hook for TSCA fees even where the chemical or ultimate product may be exempt from other TSCA programmatic requirements.

For example, impurities, byproducts, or substances imported as part of an article, which are generally exempt from premanufacture notification requirements, are not necessarily exempt from fees.

EPA initially reasoned in the final fees rule that risk evaluations required considering substances such as impurities, byproducts, or substances imported as part of articles, so the manufacturers of those substances should have to share in costs. But EPA also stated, in its response to public comments, that EPA may choose to exclude certain conditions of use from the scope of the risk evaluation, and such decisions would be made on a case-by-case basis,” which may provide a basis for manufacturers or importers to distinguish their use from those that fall within the scoping documents for the specific chemical.

In March, EPA seemingly reversed course and issued a memorandum offering that EPA will exercise its enforcement discretion and not pursue violations of the fee rules for impurities, byproducts, or substances imported as part of an article. EPA then announced that it is planning to conduct rulemaking to establish exemptions for impurities, byproducts, and substances imported in an article.

EPA plans to complete this rulemaking for exemptions by October 2021. In the meantime, EPA is finalizing the draft scope documents for the risk evaluations for the 20 high-priority substances designated in December 2019. Public comments for these draft scope documents were due on May 26 for one group of substances and will be due on June 8 for another. Environmental groups have already requested that EPA delay issuing those final scope documents, calling the draft incomplete. This portends potential litigation, but it remains untested whether any of EPA’s decisions for high-priority substances (including which uses are in or outside scope) could be challenged until the final risk evaluation
is concluded.

Given the thousands of chemicals that EPA will eventually have to consider for potential review as part of the prioritization and risk-evaluation process, the TSCA fees rule will be a recurring issue for industry.

Environmental professionals in many sectors beyond chemicals will need to learn the rule and keep their eyes out as EPA announces new lists of high-priority substances for review—and fees.

Tim Webster is a partner and co-leader of Sidley Austin LLP’s environmental practice. He handles both civil and criminal environmental enforcement defense, as well as challenges to government actions, internal investigations, and regulatory advocacy and compliance counseling. He joined the firm from the Department of Justice where he served as a Trial Attorney in the Environmental Enforcement Section.

Andrew Stewart is counsel in Sidley Austin LLP’s environmental practice, where he handles matters arising under all major federal environmental laws as well as state laws. He previously worked as a senior manager at the EPA, where he served as an Acting Division Director in the Office of Civil Enforcement.