A man rides his tricycle full of cardboard for recycling in Beijing.
Photo: Fred Dufour/AFP/Getty Images

It soon could become much harder for recycling centers across the U.S. to turn a profit, and some instead could divert reusable materials to landfills, thanks to a looming Chinese import ban on certain types of recycled materials.

China is by far the biggest importer of U.S. recyclables, but part of that market is about to close: The Chinese Ministry of Environmental Protection (MEP) notified the World Trade Organization in July that it would ban imports of certain types of recycled plastic and fiber, including soda bottles, mixed paper and newsprint.

The announcement bans imports of 24 types of recycled materials including various plastics (PET, PE, PVC and PS), as well as unsorted mixed paper, textiles, and some trace metals. And according to Beijing, starting in January every waste container entering China is to be inspected for contaminated materials.

The news has immediate implications for the domestic recycling supply chain in the U.S., stretching all the way back to the curbside recycling programs that have become popular in cities and towns.

“It could have a negative impact on recycling in general, as the system has relied on China for so long now,” said Brent Bell, vice president of recycling for Waste Management, the largest waste-service provider in the U.S. 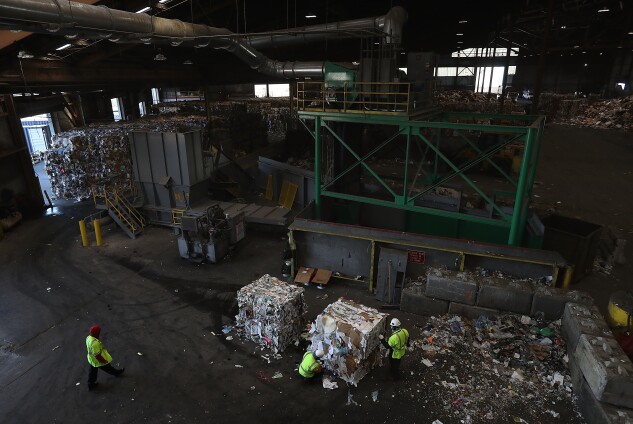 If the Chinese market is no-longer available, some experts question whether U.S. municipal recycling programs can remain viable, or if many of the products now considered “recyclable” will be reclassified as garbage bound for landfills. Other experts, however, say only a short-term disruption is likely.

The Trump administration has pledged to raise concerns with China’s government about the import restrictions, Adina Adler, senior director of international relations at the Institute for Scrap Recycling Industries (ISRI), told Bloomberg BNA.

Adler described the potential engagement as “still evolving,” with the hope that China will be open to other methods of meeting its goals to protect the environment.

The WTO filing mentions an “entry into force” starting in September, with the full ban likely taking place by the end of the year. In practice, this has given the U.S. industry very little time to adapt, with significant implications being been felt up and down the supply chain for recycled materials.

“There’s already been a lack of renewals in export licensing,” said Marc Forman, president of GP Harmon Recycling, a division of Georgia-Pacific that purchases and sells recycled fiber. “There is lots of uncertainty out there. If you have a contract to export a million pounds of paper this year, and you know it could be 500,000 next year, you’re already having to make tough decisions.”

Scrap industry groups claim that China’s new import quality standards are strict to the point of being essentially unworkable for products such as mixed paper, and polyethylene terephthalate (PET) plastic bottles, both of which are big components of curbside recycling streams.

Chinese rules now state that mixed-paper bales may contain no more than 2 percent of non-recyclable material. But the new standard will drop that limit to 0.3 percent.

“That will cause the mixed-paper market to crash,” said Bill Moore of Moore & Associates, a consultancy for the paper industry.

The largest source of mixed-paper is residentially collected recycling. If those materials aren’t being exported to China, waste collectors worry the U.S. may soon have paper and plastic piling up around the country.

Without viable markets, recycling centers will be faced with hard choices. They could raise prices to pay for additional labor and sorting equipment. They could require households to sort their own recycling. Or, they could simply send unprofitable materials to the landfill.

“We don’t think that’s something that anyone, including consumers who are dedicated to the practice of recycling, wants to see, us included,” Bell told Bloomberg BNA. 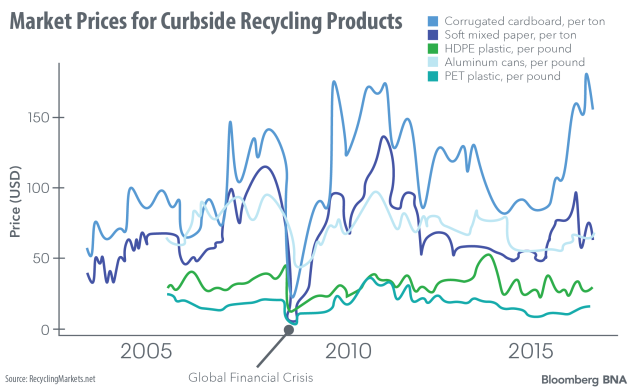 The values of plastic, paper, and aluminum have been trending downward for years, prompting many recycling centers to close and putting pressure on the remaining centers to process more waste, with decreasing funds.

In California, a state that prides itself as a leader in protecting the environment, recycling rates for beverage containers have dropped to their lowest point in almost a decade, according to data from the California Department of Resources Recycling and Recovery (CalRecycle).

State figures show more than 500 recycling centers have closed in the past two years, resulting in millions of pounds of plastic, aluminum and glass containers going to landfills.

Every day roughly 3,700 shipping containers full of recyclables are trucked to U.S. ports, loaded onto ships and sent to China. The items in those containers include plastics, metal, paper, cardboard, and textiles, which Chinese manufacturers use as raw materials.

Recyclables are among the largest exported materials by volume to China, according to the Department of Commerce.

The U.S last year exported more than 37 million metric tons of scrap commodities valued at $16.5 billion to 155 countries, said Adler of the Institute for Scrap Recycling Industries. China accounted for almost one-third of that total—about $5.2 billion.

By comparison, the top two export categories to China in 2016 were miscellaneous grain, seeds, and soybeans ($15 billion) and aircraft ($15 billion).

For decades, the market for recycling exports has benefited thanks to the massive U.S.-China trade deficit. With more container ships arriving on U.S. shores then heading the other way, shippers were desperate for anything they could find for the return trip.

“And the thing they chose was scrap materials,” Moore told Bloomberg BNA. “Because of discounts the shipping companies offered, it ended up being cheaper to send that stuff to China than to process it here.”

For years that arrangement formed the basis of a circular economy in which the U.S.—as well as the EU and other countries—would all ship waste recycling to China, only to have it eventually returned in the form of cheap and affordable finished goods. Over time, however, it also saddled China with the unpleasant reputation as “the world’s garbage dump.”

In its WTO filing, the Chinese MEP cited past efforts to clamp down on the quality of recycled imports. Through those measures, “we found that large amounts of dirty wastes or even hazardous wastes are mixed in the solid waste that can be used as raw materials,” the filing stated.

“To protect China’s environmental interests and people’s health,” the filing continued, “we urgently adjust the imported solid wastes list, and forbid the import of solid wastes that are highly polluted.”

China’s newly announced position on recycling imports actually goes back to 2013, and a government plan called “Operation Green Fence.” The plan called for a 10-month customs enforcement blitz to weed out imports of unwashed or contaminated scrap materials coming in to China.

While Green Fence may have been successful at cleaning up China’s import stream in the short term, trade experts say the impacts were only temporary.

Despite further efforts at enforcement and regulatory tweaks, the biggest factor in pushing through the current ban may have actually been Wang Jiuliang’s 2016 documentary “Plastic China.” A viral hit across the country, the film focused on China’s mostly unregulated garbage and recycling dumps.

In addition to raising awareness about a real pollution problem, the film also galvanized public opinion at the same moment that the Communist Party, lead by Xi Jinping, was promising renewed efforts to clean up China’s environment, whatever the cost.

As dirty as the market for exported waste can be, it was also a key factor in creating the economic conditions that fueled China’s manufacturing boom.

It was a system that for more than 30 years allowed the Chinese manufacturing economy to grow by leaps and bounds, without having to invest in its own domestic production capacity for raw materials such as cardboard, plastic, and some metals.

“You could really correlate the growth in the scrap market with economic growth,” said Adam Minter, author of “Junkyard Planet,” a 2013 book on the global trash trade, and a Bloomberg View columnist.

While Minter agrees that no one should fault China for taking steps to clean up its imports, he also points to potential environmental impacts resulting from tougher import restrictions.

“The worst recycling center is still far better than the best open pit mine,” said Minter. “China needs raw materials and recycling is the feedstock. So if they’re not getting that feedstock from secondary sources, that means drilling more oil wells and cutting down more trees.”

Minter also points out that the rules do not amount to a complete ban on scrap exports to China. Likewise, the U.S. still has ready buyers in other countries, such as Canada.

Others view the environmental impacts of China’s decision as more of a short-term disruption than a fundamental shift in the U.S. recycling economy.

“I don’t see the stuff on someone’s curb ending up in the trash. There is a home for this recycling somewhere,” said Dylan de Thomas, vice president of industry collaboration for The Recycling Partnership, a national recycling nonprofit that receives funding from Coke, Pepsi, and Target.

De Thomas said the recycling market won’t collapse as there’s simply too much interest in recycling, from both the general public and companies.

“The really large waste and recycling companies have a vested interest in the recycled fiber and plastic markets,” he said.

De Thomas points to e-commerce giants such Amazon, with its demand for cardboard and plastic packaging, as one place that may be able to swallow up more domestic recycling capacity.

“If you bale it [recycled paper, plastic, metal], they will come,” said de Thomas. “This recycling will ultimately find a home in new products, as long as there is demand for those products.”

To contact the reporter on this story: Adam Allington in Washington at aallington@bna.com

To contact the editor responsible for this story: Rachael Daigle at rdaigle@bna.com