Food waste is taking on a new meaning in the era.

Dumped milk in Wisconsin. Smashed eggs in Nigeria. Rotting grapes in India. Buried hogs in Minnesota. These disturbing images have stirred outrage around the world. But here’s the surprising part: the world may not actually be wasting more than normal, when a third of global food production ends up in landfills.

What’s changing now is that rather than being thrown out by consumers as kitchen waste, an unprecedented amount of food is getting dumped even before making it into grocery stores.

Blame broken supply chains. Across the globe, production is handled through what’s known as just-in-time methods. Output from farms can be shuttled into stores or restaurants within just a few days, and the next batch of and livestock is ready to take its place immediately. 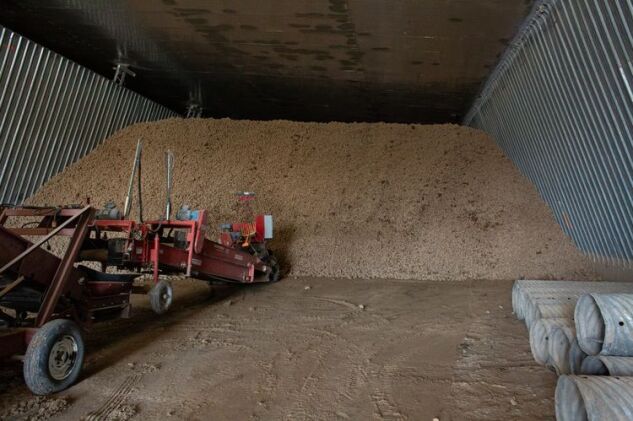 When those chains face challenges -- as has been the case with trucking, ports, labor crunches, restaurant shutdowns and slowed trade -- there’s a huge backlog of supply that never makes it to stores.

That will likely have devastating consequences on food security. Prices could end up rising further as millions are already suffering financially from the Covid-19 fallout.

“People who can barely afford to feed themselves now will face even more problems,” said Marc Bellemare, a co-editor of the American Journal of Agricultural Economics. “What worries me is human welfare.”

Before the pandemic, an estimated $1 trillion of food production ended up lost or wasted. The great bulk of that came from trash at home -- about 40% in the U.S. Now as people deal with fewer trips to the store and concerns over prices, dumping from the kitchen is expected to tumble, countering other losses. Some analysts say total waste could still be “potentially” higher this year, but close to a dozen interviews showed that no one was ready to take a firm stand on that.

“We don’t know whether it’s going to be more or less food waste in total this year, because you cannot underestimate that people are checking their own behavior at home. But I’m very worried about the waste situation when it comes to food security,” said Bellemare, who’s also a professor at the University of Minnesota’s Department of Applied Economics in St. Paul.

World hunger could double. That’s according to a letter last month to world leaders signed by Nestle SA, Unilever NV, Danone SA and PepsiCo Inc. The United Nations has also warned of the risk, with its World Food Programme the number of people facing acute food insecurity could reach 265 million.

Some groups are already trying to solve the disconnect between food waste and hunger. The U.S. Department of Agriculture, for example, is $3 billion worth of surplus American meat, dairy and fresh produce that the agency will then partner with distributors to deliver to food banks and other organizations. The initiative is known as the “Farmers to Families Food Box Program.” But it’s hard to say how much of a dent those kinds of measures will make. 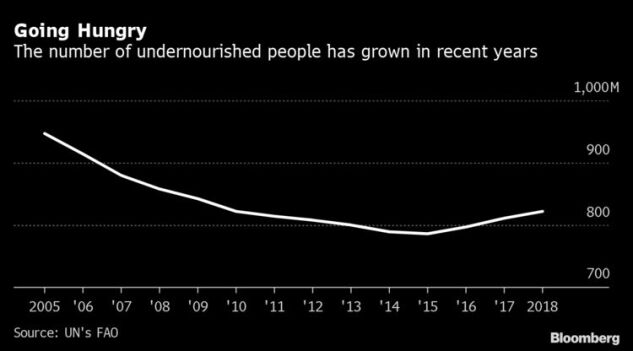 All this is happening at a time when food production in many ways has never been greater. Global harvests of rice and wheat -- crops that account for about a third of the world’s calories -- are poised to reach all-time highs in the upcoming season. The U.S., the No. 1 meat exporter, has seen its hog herd balloon to a record while poultry and egg production have also climbed.

But just because food is getting produced, doesn’t mean it’s getting to those who need it. That’s true under normal circumstances, but grows much more acute because of supply-chain disruptions caused by the pandemic.

“A good chunk of the food waste is due to the rigidity of our food system -- highly specialized processing plants” such as dairy facilities that make cheese for restaurants and which can’t redirect ouput toward grocery stores, said Dana Gunders, the executive director of ReFED, a U.S.-based nonprofit focused on reducing food waste.

Take the case of Michael Hill, who has been growing blueberries in central Florida for five years. He and his wife run two farms producing about 700,000 pounds a year, collected between March 20 and May 1. The breakdown in the supply chain meant retailers have placed limited orders, while restaurant shutdowns wiped out another chunk of demand. He had to leave 30% to 40% of his crop uncollected in the ground, where it will be eaten by birds or rot.

Across the ocean, Adewole Oluwagbenga owns a poultry farm and a fish farm in Nigeria. He’s seen demand drop by about 70% because of recent closures for restaurants and bakeries. In a given week that means about 5,000 to 6,000 eggs go unsold.

“Right now, some go bad,” he said. “We have not really been able to do much about it, and that’s where we have been having discussion on what we can do to begin to preserve. Nobody saw this coming, nobody was prepared for this.” 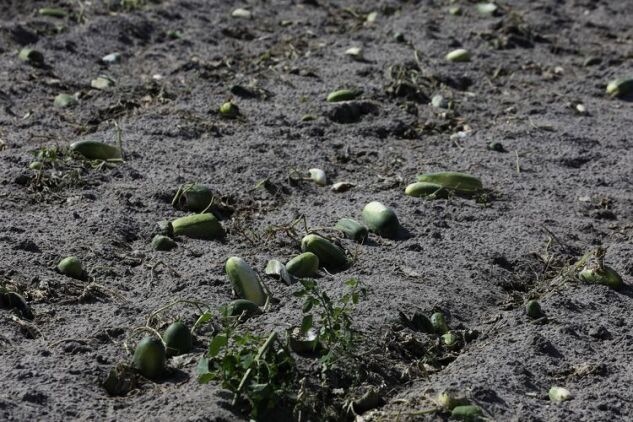 A cucumber field that has been plowed over in Mount Dora, Florida, on April 22.
Photographer: Eve Edelheit for The Washington Post via Getty Images

For food banks and other non-profits, the incoming supplies are larger than most groups have the resources to deal with.

Fareshare, the U.K.’s biggest food waste charity, received 758 metric tons of food in a recent week, more than double what it would get before the virus-lockdown era. The organization redistributes food from suppliers and supermarkets to charities and community groups via its regional distribution centers.

“What you don’t have is a perfect match of what is surplus, what is waste and what the charity sector needs,” said Lindsay Boswell, Fareshare’s chief executive officer. “There are quite a few businesses giving us their food as more people are suddenly more conscious of people going hungry. But if you’re hungry, a pallet of lemons doesn’t help you much.”

It’s not all bad news.

Worries over catching the virus means fewer trips to the grocery store and less time spent there. That’s forcing people to become more conscientious food shoppers, according to Jennifer Molidor, a senior food campaigner at the Center for Biological Diversity.

Consumers are choosing shelf-stable items that will last longer, bringing grocery lists to reduce the time they spend in the supermarket and becoming more mindful about their cooking habits. Data from the U.K. drives this point home -- nearly half of respondents in a survey said they are throwing away less food, according to research commissioned by environmental group Hubbub.

While reducing home waste in the longer term would create significant benefits for natural-resource depletion and the environment, food insecurity still remains an immediate problem in the pandemic. And it will have a lopsided impact on the world, with poorer countries and food-importing nations suffering the biggest hit.

Meanwhile, producers are left with tough choices and little cash flow to pay their debts. Lockdown measures have snarled transportation and wholesale markets have collapsed.

Almost $1 billion worth of grapes have been either destroyed or dried into less profitable raisins, according to P. Chengal Reddy, chief adviser to the Consortium of Indian Farmers Associations.

“Taking another loan will be very expensive, so, I will need to use some of my savings and sell my wife’s jewelry to invest in the next crop,” said Ramesh Vithoba Zoman, 56, who grows grapes on 8 acres in the western state of Maharashtra. He estimates he’ll take a loss of about 1.65 million rupees ($21,641) this season compared with an expected profit of about 500,000 rupees.

“I have told the bank that I can’t repay the loan this time, and I know they will charge me additional interest. It will create problems for me in the future.”

To contact the editors responsible for this story:
at jattwood3@bloomberg.net