The next five years will be critical for Statoil, Orsted, and other companies to prove the viability of offshore wind in the U.S., with firms gearing up to begin construction on at least eight offshore wind farms along the East Coast through 2023.

Offshore wind developers say Trump administration support for offshore wind has been strong during its first year in office, but states are providing the biggest push for new development, especially Massachusetts, Maryland, and New York—which on Jan. 29 released an offshore wind master plan to ignite a $6 billion offshore wind power industry in the state.

The offshore wind industry is eager to develop one of America’s largest untapped sources of renewable power. While it has been expanding in Europe for more than a decade, it is almost entirely new to the U.S.

More than 4,000 gigawatts of offshore wind power potential exist off U.S. coastlines, according to the National Renewable Energy Laboratory, and almost none of that is being tapped today. Deepwater Wind built North America’s first—and so far only—offshore wind farm in 2016, a 30-megawatt, five turbine project near Block Island, R.I.

“The Outer Continental Shelf’s offshore wind potential is a tremendous asset and, now more than ever, we must use every tool at our disposal to ensure an energy-secure future—one that promotes jobs and is affordable, competitive and safe,” Interior Department spokeswoman Heather Swift told Bloomberg Environment. “Offshore wind will play a big role in this future.”

Today, state policies either mandating procurement of offshore wind power or providing tax credits for it are—more than the federal government—driving the industry as it proves its viability in the U.S., Thomas Brostrom, North American president for Danish firm Orsted, told Bloomberg Environment.

“It would be very helpful to see real commercial large scale offshore wind projects going into the water so they can see how many jobs it provides,” Brostrom said. “The challenge is, of course, there is basically a few years before you can have the wind farms up and spinning.” 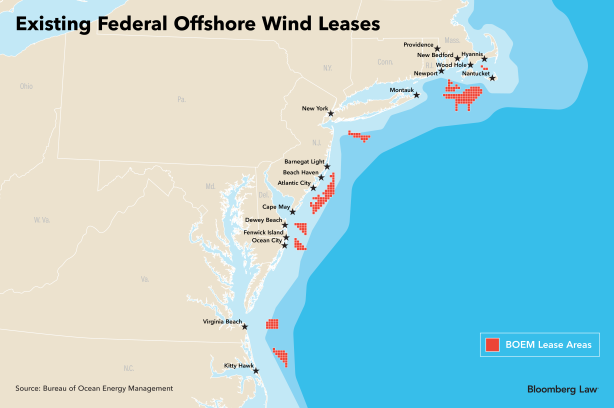 Offshore wind farm planning, leasing, permitting, securing power purchase agreements, and construction is a years-long process. Some wind farms currently in the earliest stages of planning may take five or more years to develop before they are generating power, if they are built at all.

“The energy business is not a federal business,” he said. “Energy is bought and sold at the local level. State governments set policy on the power they want.”

Crucial among those states is New York, which hopes to jump-start a $6 billion offshore wind industry in the state that would employ 5,000 workers and help the state cut its greenhouse gas emissions, according to the new master plan.

“While the federal government continues to turn its back on protecting natural resources and plots to open up our coastline to drilling, New York is doubling down on our commitment to renewable energy and the industries of tomorrow,” New York Gov. Andrew Cuomo (D) said in a statement Jan. 29.

Statoil is planning a 600 megawatt wind farm called Empire Wind for the site. If the company finds a buyer for the power the project will produce, construction could begin in 2023, spokeswoman Julia Bovey told Bloomberg Enviornment.

Deepwater Wind has contracted with the Long Island Power Authority for 90 megawatts of power from the proposed South Fork Wind Farm, which is planned for a site east of Long Island and southwest of Martha’s Vineyard, Mass. Construction could begin in 2019.

Other states, led by Massachusetts, with policies supporting offshore wind development, are expecting a flurry of activity over the next five years.

Deepwater Wind submitted a bid with a proposal to build a wind farm called Revolution Wind. If Massachusetts selects the project, construction could begin in 2021. If the state chooses another proposal, Deepwater Wind will submit its plan in future of bidding rounds, Grybowski said.

Orsted was also among the bidders, proposing to begin construction in the early 2020s on its Bay State Wind project if it wins the state contract. The project would be at least 400 megawatts and would be built southwest of Martha’s Vineyard, Brostrom said.

Another bidder, Vineyard Wind, is planning a wind farm on a federal lease in Massachusetts south of Martha’s Vineyard.

Orsted has two other projects in the works in different states, including two wind turbines expected to be built by 2020 off the coast of Virginia in a partnership with Dominion Energy. Orsted also has early plans for a large wind farm called Ocean Wind, which would be built 10 miles off the coast of New Jersey and could grow to larger than 1,000 megawatts. Construction could begin in the early 2020s, Brostrom said.

In Maryland, U.S. Wind, a subsidiary of Italian firm Toto Holding SpA, is planning to build more than 700 megawatts of offshore wind off the coast of Ocean City slated to begin construction in 2019, Paul Rich, director of project development for U.S. Wind, told Bloomberg Environment.

Nearby, Deepwater Wind is planning the 120 megawatt Skipjack Wind Farm northeast of Ocean City, with an expected operating date of 2022.

U.S. Wind is planning a project for up to 2,300 megawatts of offshore wind planned for off the coast of New Jersey, where construction could begin in 2022 depending on permitting, Rich said.

Most, but not all, of the offshore wind farms now in development will be built within the next five or six years with sufficient state and federal support and public outreach, Jeremy Firestone, director of the Center for Carbon-free Power Integration at the University of Delaware, told Bloomberg Environment.

“It would seem that in the next five years, all of those projects ought to be able to undertake the necessary environmental, geotechnical and geophysical reviews to secure construction and operation permit,” he said.

The Trump administration is gearing up for more offshore wind leasing in the Northeast, paving the way for other new wind farms to be built later in the next decade.

The Bureau of Ocean Energy Management (BOEM) is targeting Massachusetts late this year and New York in late 2019 for the next two federal offshore wind lease sales, expected to be announced in the next several months. The area planned for leasing in New York will be in an area south of Long Island and east of the Jersey Shore.

With another developer approaching the agency with an unsolicited lease request for an area southwest of the Hamptons, and New York’s offshore wind mandate, BOEM is expecting high interest in the 2019 sale, Moore said.

(Corrects in 25th paragraph to show Orsted plans to begin construction in the early 2020s if it wins a Massachusetts state contract.)

To contact the reporter on this story: Bobby Magill at bmagill@bloombergenvironment.com