The Pebble mine in Alaska was dealt a potentially lethal blow after the U.S. Army Corps of Engineers rejected an essential permit for the project.

The proposed mine in southwestern Alaska, which would tap one of the world’s largest undeveloped copper and gold deposits, has been dogged by protests for years, as conservationists warn industrial mining operations near Bristol Bay threaten a flourishing sockeye salmon fishery.

In August, the Army Corps concluded the mining plan from “would likely result in significant degradation of the environment,” and the agency demanded a mitigation plan to offset the project’s effects on nearby wetlands. Northern Dynasty’s subsidiary submitted the mitigation plan earlier this month, though the details weren’t released to the public.

Northern Dynasty called the decision “politically motivated” and said it was not supported by the Corps’ recently released environmental impact statement. The company said it intends to launch an appeal within 60 days. Developers also could challenge the rejection in federal court. 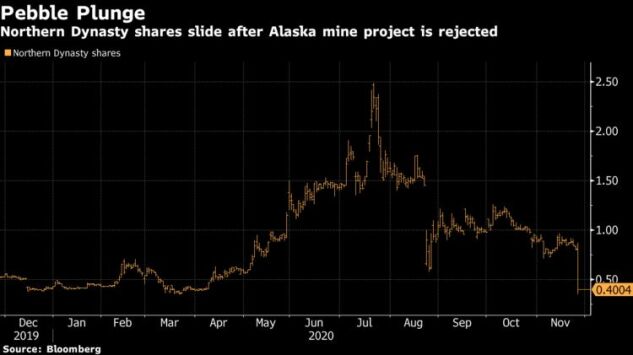 Delarosa said the Army Corps’ decision was “based on all available facts and complies with existing laws and regulations,” following “an in-depth analysis” of the project and roughly three years of review.

Pebble is in a remote area in southwestern Alaska that drains into Bristol Bay. Conservationists, local activists and fishing operations have fought the project for years, citing potential on the environment and native cultures in the region. More recently, Pebble has drawn opposition from including the president’s son, and skepticism from some prominent local politicians.

The decision was heralded by Alaska’s two Republican senators, and . “This is the right decision, reached the right way,” Murkowski said in an emailed statement. “It will help ensure the continued protection of an irreplaceable resource – Bristol Bay’s world-class salmon fishery – and I hope it also marks the start of a more collaborative effort within the state to develop a sustainable vision for the region.”

But there were also voices in opposition. “Canceling Pebble Mine is disastrous for the unemployed and destitute people in southwest Alaska who need the high-paying jobs and economic activity the mine would provide for many decades,” said , director of the Competitive Enterprise Institute’s Center for Energy and Environment. Alaska “urgently needs to diversify its economy away from oil and gas production. Canceling Pebble means that many other potential mining projects in Alaska will never be attempted,” he said.

If developed, the mine would be one of the largest producers of both copper and gold in the U.S., according to a recent presentation by Northern Dynasty, potentially producing an average of about 318 million pounds of copper, 1.8 million ounces of silver and 362,000 ounces of gold annually over a 20-year mine life.

“Sometimes a project is so bad, so indefensible, that the politics fall to the wayside and we get the right decision,” Bristol said.

“How many other projects are strongly opposed by both Alaskan senators, by 80% of the people that live in the region, by commercial fishermen, by recreational fishermen, by Donald Trump Jr., and by Jane Fonda?” said , a senior attorney with the Natural Resources Defense Council. “It’s astonishing the range of opposition, and that, I think, puts it in a unique category. This project really has no friends, other than a Canadian company and its shareholders.”

The project took a further public-relations blow in September after the release of covertly taped comments revealed a top mining executive boasting of his ties to state and federal leaders. The so-called Pebble Tapes incensed the project’s critics and led to the of Pebble head .

Regardless of the Army Corps’ verdict, conservationists are pressing the to even more definitively kill the proposed mine by wielding its broad authority under the Clean Water Act to veto projects involving the discharge of dredged material. President-elect has promised to block the project, calling the area “no place for a mine” and noting the government reached the same conclusion while he was vice president.

“The Biden administration should take the next step and use the Clean Water Act to place permanent limits on mining in Bristol Bay to protect the salmon fishery and the communities that depend on it,” Bonnie Gestring, Northwest program director of environmental group Earthworks, said in a statement.

To contact the reporters on this story:
in Washington at jdlouhy1@bloomberg.net;
in Toronto at sfrank9@bloomberg.net