Electronic cigarettes and pods by Juul, the nation's largest maker of vaping products, are offered for sale at the Smoke Depot on Sept. 13, 2018, in Chicago, Ill.
Photographer: Scott Olson/Getty Images

is being sued by New York for allegedly trampling state marketing laws by targeting teenagers in advertisements for e-cigarettes and making misleading statements about nicotine content in vaping products, among other things, the state’s top law enforcement officer said.

The lawsuit, announced Tuesday by New York Attorney General , comes one day after California filed a similar complaint against Juul. The allegations by the Democratic-led states add to earlier legal challenges by schools, parents and others accusing the embattled company of wrongdoing.

Perhaps the most serious claim in New York’s case -- that Juul marketed e-cigarettes to teens -- caused “large numbers of New York youth to become addicted to nicotine,” the attorney general’s office said in a statement. 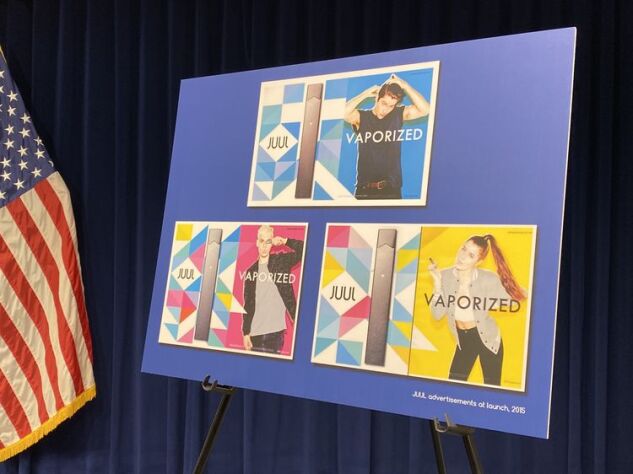 James said a recent National Youth Tobacco Survey indicates about 4.1 million high school students and 1.2 million middle schoolers currently use e-cigarettes in the U.S. As of Nov. 13, the Centers for Disease Control and Prevention reported 42 deaths tied to e-cigarette or vaping-product use, with a further 2,172 cases of associated lung injury reported nationwide.

New York claims Juul engaged in direct outreach to high school students, including at least school in New York where students were falsely told that its products were safer than cigarettes. James said a 17-year-old Bronx boy died from a vaping-related illness.

Adam Fine, who is principal at a school in East Hampton, New York, said at the press conference that he’s been more prepared for a mass shooting than the onslaught of vaping among hundreds of students.

Juul spokesman Austin Finan, in a response to California’s lawsuit on Monday, said in a statement that the company is committed to “resetting the vapor category” and “earning the trust of society” by working with authorities to “combat underage use and convert adult smokers from combustible cigarettes.”

In the U.S., Juul has stopped accepting orders for Mint JUULpods -- a popular flavor with younger consumers -- and suspended all product advertising, Finan said. “Our customer base is the world’s 1 billion adult smokers and we do not intend to attract underage users.”

New York’s lawsuit underscores the legal challenges facing Juul, the top seller of e-cigarettes, as deaths and illnesses linked to vaping add up across the U.S.

“By glamorizing vaping, while at the same time downplaying the nicotine found in vaping products, Juul is putting countless New Yorkers at risk,” James said. The suit, which seeks unspecified monetary damages, alleges that San Francisco-based Juul’s ads misled consumers “by misrepresenting its products as a safer alternative to traditional cigarettes.”