The White House is developing plans to get the U.S. economy back in action that depend on testing far more Americans for the coronavirus than has been possible to date, according to people familiar with the matter.

The effort would likely begin in smaller cities and towns in states that haven’t yet been heavily hit by the virus. Cities such as New York, Detroit, New Orleans and other places the president has described as “hot spots” would remain shuttered.

The planning is in its early stages. But with encouraging signs that the outbreak has plateaued in New York after an aggressive but economically costly social-distancing campaign, President and his top economic advisers are once again boldly talking about returning Americans to work. 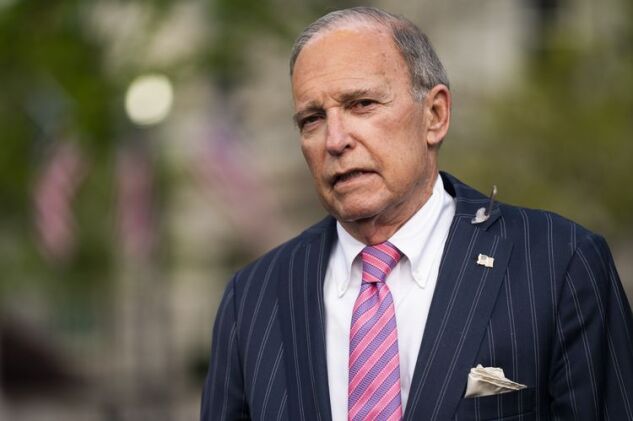 , the director of the National Economic Council, said earlier Tuesday on Fox News that reopening might begin within four to eight weeks.

“We are coming down, I think, the home stretch, that’s what the health experts are telling us,” he said at a White House event. “Once we can reopen this thing, I think it’s going to be very successful.”

The S&P 500 surged 7% Monday on investor optimism that the U.S. and other countries were potentially turning the corner in the outbreak with a slowing death toll. The index fell slightly Tuesday.

Trump has sought a pathway to return Americans to work and schools since early March, even when his top health advisers recommended against it. As the outbreak mushroomed to hundreds of thousands of cases -- filling hospitals in New York City and threatening to overwhelm health systems elsewhere -- he backed away from a return to normal until at least the end of April.

But he continues to show his frustration with a pandemic that has blunted his best argument for re-election, the strength of the U.S. economy.

“We had the greatest economy in the history of the world, we had the most people working in the history of our country, almost 160 million people, far more than ever before. And then one day, our professionals correctly came to us and they said, ‘sorry, sir, we have to close down our country,’” Trump lamented Monday at a White House news conference.

The White House’s dilemma is that Trump didn’t lead on social distancing -- he endorsed the practices only after many governors, municipal leaders, businesses and ordinary Americans had already begun isolating themselves. It isn’t clear that they will respond if Trump urges Americans to resume normal business practices and socializing before the outbreak abates.

, the director of the National Institute of Allergy and Infectious Diseases who is one of Trump’s top medical advisers on the outbreak, said Wednesday in a Fox News interview that members of the president’s coronavirus task force talked late into the evening on Tuesday about what it might look like to begin re-opening the economy.

“You don’t want to let up at a time that’s premature,” he said. But he said U.S. social distancing efforts appear to have been effective at reducing the toll of the virus, meaning fewer people will die than the 100,000 to 240,0000 the White House projected last week.

“It makes sense to at least plan what a re-entry into normality would look like,” he said.

One person familiar with the White House’s planning said that a reopening effort is likely within about 30 days and that it’s expected officials at the Centers for Disease Control and Prevention or other government health professionals may object. Further outbreaks are likely and the economy won’t turn back on like a light switch, as Trump has portrayed, the person said.

The administration sees rapid and widespread testing as a crucial step, one person familiar with the matter said, allowing public health authorities to better identify infected people, including those who don’t show symptoms, and isolate them from healthy people who could go about their businesses.

Testing for the virus initially faltered in the U.S. because the CDC had difficulty developing and manufacturing a diagnostic tool. The country hadn’t tested 1 million people until March 31, well after states and cities had begun ordering their residents to stay home to curb the outbreak. The U.S. only recently achieved a pace of more than 100,000 tests per day, according to the Covid 19 Tracking Project, which relies on state data. 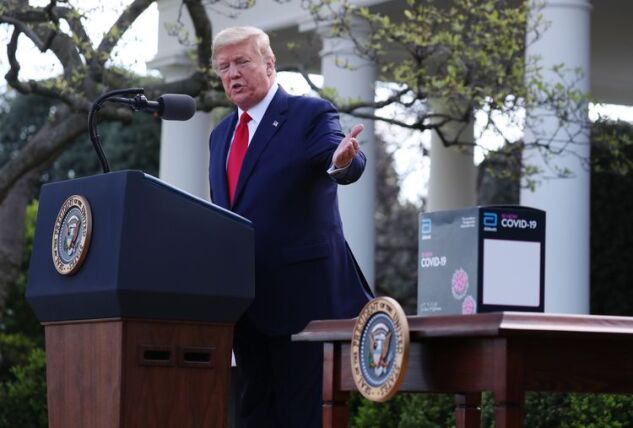 Trump has championed an ’ test that provides results in 15 minutes, and it has begun to be administered to all White House aides and anyone who comes into contact with the president or vice president. Assistant Secretary for Health said the administration aims to have “millions” of tests on the market by May that can tell if healthy people have been exposed to the virus and developed antibodies against it.

But hospitals and laboratories are still encountering difficulties scaling up testing because of supply shortages and bottlenecks at commercial firms.

A vaccine for the virus isn’t expected to be available until next year. Meanwhile, the U.S. should ideally pair “very aggressive surveillance” for the virus, through widespread testing, with an effective therapeutic to treat people who become infected, said , the former FDA commissioner under Trump who informally advises the White House.

“We tolerate that risk every day with lethal pathogens,” he said. “The therapeutic gets us into a frame of mind that gives us a confidence to go back to some elements or most of the elements of normal life.”

The president has allies for a relatively rapid re-opening in some of the country’s statehouses.

Last week, Utah Governor , a Republican, announced a plan to allow any resident in his relatively sparsely populated state who wants a coronavirus test to get one. The state wants to assess every resident for risk of Covid-19, test widely, and trace the contacts of those who test positive, state officials said last week.

The state is encouraging every Utah resident to respond to an online survey at the new TestUtah.com website, regardless of whether they have symptoms or known exposure to the virus. Those with symptoms or other risk factors will be directed to drive-through testing sites.

North Dakota plans to conduct drive-through testing in two communities, Amidon and Gladstone, that have been relatively untouched by the virus. The state aims to test as many people as possible there, including those with no symptoms. Governor called it a “proof of concept” for a system to monitor the country for recurrences of the virus after the peak of the outbreak.

Business leaders are pressing the administration to hold firm to the May 1 date to restart the world’s largest economy. They’ve advocated that it be done on a gradual basis, based on infectious data, to determine which parts of the U.S. should re-open first, said Stephen Moore, a conservative economist and Trump ally who says he’s in regular contact with the White House.

Moore said parts of Nebraska, Iowa and Wisconsin could be examples of other areas that may be able to initially re-open.

“The worst thing of all, probably both politically and economically, is to start to open up the economy in May” only to see cases increase again, forcing another shutdown, Moore said. “That would be catastrophic.”

To contact the reporter on this story:
in Washington at mparker22@bloomberg.net