A page in ByteDance Ltd.'s TikTok app is displayed on a smartphone in an arranged photograph in Beijing, China, on Sept. 1.
Photographer: Yan Cong/Bloomberg

will get full access to review TikTok’s source code and updates to make sure there are no back doors used by the company’s Chinese parent to gather data on the video-sharing app’s 100 million American users, according to people familiar with the matter.

TikTok parent and Oracle submitted these details in their proposal to the Trump administration with a goal of averting an outright sale of the app or a shutdown of its U.S. operations set to take effect Sept. 20. U.S. President has threatened to ban the app in a pair of executive orders issued last month based on U.S. national security concerns.

The terms of the agreement seem to of meeting those national security concerns expressed by administration officials including Secretary of State , according to people familiar with the matter. Pompeo, Attorney General William Barr and other members of the administration have been talking directly with Oracle executives, one person said. 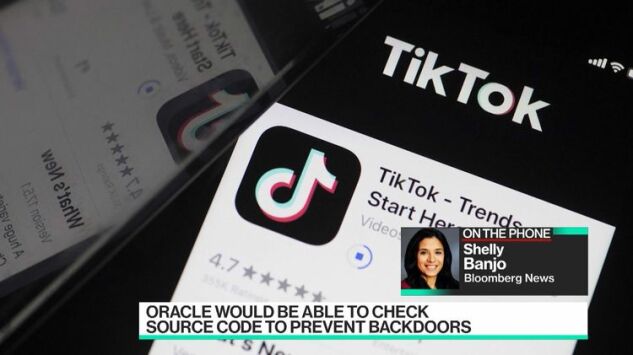 Watch: Oracle Corp. will get full access to TikTok’s source code and updates to make sure there are no back doors used by the company’s Chinese parent to access data on the video-sharing app’s 100 million American users.
(Source: Bloomberg)

Beijing is less likely to oppose the current deal since it doesn’t involve the transfer of ByteDance’s algorithms, which recently export restrictions specifically encompass, a person close to the negotiations said. But Trump, speaking Wednesday with reporters, said he is getting a briefing on the issue Thursday morning, adding that he didn’t like the idea of ByteDance retaining control of TikTok.

“Just conceptually, I can tell you I don’t like that,” he said after a reporter told him that ByteDance would retain a majority of the company’s assets, with Oracle acquiring a minority stake.

“I’m not prepared to sign off of anything,” Trump said. “I have to see the deal.”

TikTok has emerged as a top target in Trump’s effort to crack down on China ahead of the Nov. 3 election. The president is trailing his Democratic opponent in the polls and seeking to use his tough stance with Beijing as a selling point to voters. That’s despite the fact that American investors collectively hold roughly 40% of ByteDance’s equity, with the rest owned by founder , ByteDance employees and non-U.S. investors, the person said.

ByteDance plans to create a new standalone company for TikTok’s U.S. operations in which it would remain majority owner, but give Oracle and other American investors minority stakes in the new business. Public statements made by both companies calling Oracle the newly formed company’s “trusted technology partner” were met with confusion, one of the people said.

The new details shed light on Oracle’s role in the partnership and go beyond just housing data inside the software company’s U.S. cloud servers, according to the people, who asked not to be identified because they were not authorized to speak publicly.

Oracle will be able to check all source code from the algorithms that decide which TikTok videos get shown to which U.S. users to ensure there are no entry points for the Chinese parent. Oracle, the world’s second-largest software maker, will be able to continue to review the technology as updates come in to make sure there are no new points of access to the data, the people said.

Under the proposed deal, the newly formed TikTok would also hire an independent board approved by the U.S. government. The new U.S.-based company would allow oversight by a third party, which will report to the U.S. government and provide continuous audits, reports and protocols for handling any incidents that may arise, according to the people. That means if, say, Beijing finds a way to infiltrate TikTok’s code, Oracle and the independent board would have the means and agency to spot it.

Despite the terms, administration officials remain wary about the proposed new ownership structure and how much influence that would give China over the company.

Treasury Secretary has reviewed the proposed deal. was only briefed on the deal Wednesday and is reviewing it, according to a Justice Department official who declined to comment further. Barr spoke with Oracle executives Wednesday morning, two people familiar with the situation said. Pompeo had a conversation with the company officials last week.

The Treasury, State and Justice departments are all part of the Committee for Foreign Investments in the U.S., or Cfius, which reviews deals for national security implications. In a meeting Tuesday afternoon, officials raised concerns about a deal that would leave a majority stake of TikTok’s U.S. assets in ByteDance’s hands, with Oracle taking a minority share, the people said.

The proposal also calls for the newly formed U.S. company to hire 25,000 American workers in a wide range of jobs from content moderation, engineering, product and marketing.

However, the company is not going to recreate the powerful algorithms that run the app based on data that ByteDance has collected for years, one person said. ByteDance will still have visibility into the algorithms, but Oracle will be able to monitor the data flows and review and approve all updates to the code.

To contact the reporters on this story:
in Washington at nwadhams@bloomberg.net;
in New York at sbanjo@bloomberg.net