President ’s pardons of some of his closest allies have sparked a political firestorm, but criminal justice reform advocates believe he has done one thing right: sideline the Department of Justice from clemency decisions.

But rather than use that control the way Trump has, those advocates want to see President-elect use it to help non-violent drug offenders with questionable convictions or harsh sentences.

Relying on the DOJ’s Office of the Pardon Attorney to review and make recommendations on clemency requests, they say, is bureaucratic and puts those decisions in the hands of the department that put the offenders behind bars.

“It can be improved by not depending on the same office that fought for an individual’s conviction and draconian sentence to look back and say we need to provide relief,” said Kemba Smith Pradia, founder of the Kemba Smith Foundation, who had her own sentence for a non-violent offense commuted by President Bill Clinton. “There is a conflict right there.”

Civil rights advocates are urging Biden to make clemency work more like it did in President Barack Obama’s second term.

A Bloomberg Industry Group analysis of DOJ records shows that the majority of Obama’s pardons went to those convicted of non-violent drug crimes. Under his 2014 Clemency Initiative aimed at helping non-violent, low-level offenders, the number receiving clemency in his second term far surpassed other recent presidents.

Not only did Obama issue more pardons and commutations for non-violent drug crimes—10 times more than Trump, George W. Bush and Bill Clinton combined—but they also made up a strikingly higher percentage of his overall clemency recipients. Three out of every four people granted clemency by Obama had committed such offenses. By contrast, Trump, Bush and Clinton all hovered around 20 percent. 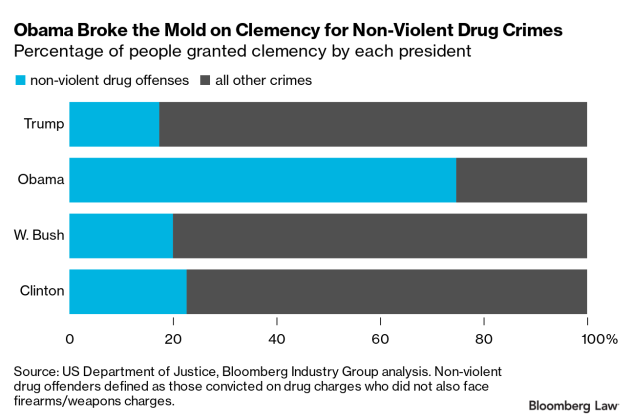 Obama’s last year in office dwarfed any before it—he granted clemency to 818 non-violent drug offenders in 2016, and in the waning days of his presidency in January 2017 granted another 444 requests, the analysis found. Bloomberg Industry Group defined non-violent as those not also charged with gun or weapons crimes.

Since then, only 15 individuals have received clemency under Trump for such offenses, accounting for 17 percent of his total pardons and commutations. Overall, Trump has granted clemency to fewer people than his predecessors.

“It’s our hope that the Biden-Harris administration will look to where we were during the Obama years, but go beyond that,” said Miriam Krinsky, a former prosecutor and founder and executive director of Fair and Just Prosecution. “That should be the floor, not the ceiling.”

Some of Trump’s decisions have garnered praise, such as clemency for Alice Marie Johnson, a Black grandmother who served 21 years for a non-violent offense. But her case was brought to Trump’s attention by a famous supporter, Kim Kardashian, who met the president to discuss prison reform.

“Celebrity support can get a fair hearing on your side,” said Ames Grawert, senior counsel in the Brennan Center’s Justice Program. “But how many more Alice Maries are there who’ve never had that luck?” 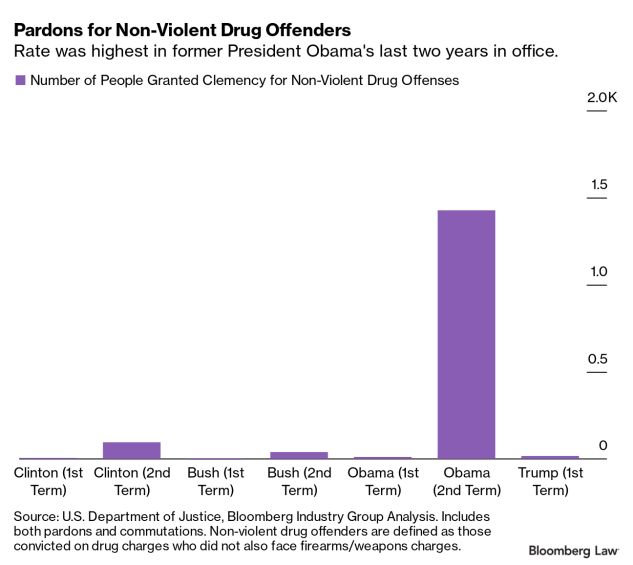 Biden’s criminal justice plan proposes a number of reforms and says he will “broadly use his clemency power for certain non-violent and drug crimes.” The campaign would not comment past the plan’s language.

In addition to removing the sole oversight of the Office of the Pardon Attorney, Biden could improve the process by creating a permanent independent advisory panel that includes criminal justice reform activists, defense attorneys and pardoned convicted offenders, alongside federal prosecutors, supporters say.

“It should certainly include people who are formerly incarcerated because they know that walk better than anybody,” said Cynthia W. Roseberry, deputy director of policy in the Justice Division of the American Civil Liberties Union. “Also include criminal justice reform experts and members of the community who can opine about the fact that we want people to come home.

“I’m not suggesting leaving DOJ out,” Roseberry added. “They can definitely have a prosecutor at the table. But it should look like the community.”

Former presidents have used clemency review boards before for specific cases, according to a 2020 report from the Brennan Center for Justice. President Gerald Ford put together an 18-member board to process requests from those convicted of avoiding the draft during the Vietnam War.

The pardon process has long been an onerous and painful one for offenders. Jason Hernandez, sentenced in 1998 to life without parole plus 320 years for a drug offense, waited 26 months for Obama to approve his request in 2013. He then sat in prison for another year and a half before being released.

“I know people who had their petition deferred after up to six years of waiting,” Hernandez said. “You’re just sitting there waiting and don’t know what’s going on.”

Under Trump, the process became “Byzantine,” Grawert said. “People don’t have faith that their petition will be heard and given a fair shake unless someone can make sure it’s heard by the right people.”

The DOJ has aided the executive branch with the clemency process for more than 125 years, a department spokesperson said.

“The Pardon Attorney’s Office is staffed with talented and dedicated attorneys and support staff who ably serve their mission to assist the President in the exercise of executive clemency,” the spokesperson added.

The agency may be hesitant to relinquish any control over the process because of its lengthy experience, Grawert said.

“There’s a lot of inertia that keeps things like clemency inside the DOJ, which I understand,” he added.

“The DOJ is not the only entity that has an important view on clemency applicants,” Grawert continued. “The DOJ can still be a part of the process, just not the only part.”

Criminal justice reform advocates say Biden has a responsibility to focus on non-violent drug offenders after the 1994 crime bill he co-authored put many of them in prison.

“The 1994 crime bill and the war on drugs put a lot of Black people in prison,” Roseberry said. “I have to believe that they are people of their word and that they are interested in redeeming the soul of America as they said they are.”

— With assistance from Jasmine Han

To contact the editors responsible for this story: at mmali@bloombergindustry.com; at bkohn@bloomberglaw.com