President plans to begin immediately unwinding his predecessor’s policies on immigration, climate and other issues on Wednesday with at least 15 executive actions, including moves to reverse U.S. withdrawals from the and the World Health Organization, and stop construction of a border wall.

Biden began signing the actions in front of reporters at the White House Wednesday evening, starting with an order requiring face masks on federal property. He said that some of his directives would “help change the course of the Covid crisis” and that his actions on racial equity “are all starting points.” 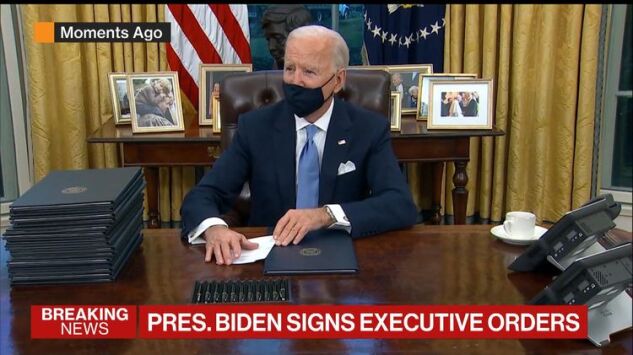 Reporters were escorted out of the Oval Office after Biden signed three of the documents. Text of the orders and other actions was not immediately released.

Biden is also expected to sign orders revoking a permit for the controversial Keystone XL pipeline and ending former President travel ban against some predominantly Muslim and African countries.

While some of the orders will roll back unilateral measures Trump imposed, others -- including an extension of moratoriums on student loan payments, foreclosures and evictions -- are intended to address the health and economic crisis wrought by the pandemic.

“We’re seeing too many Americans that are just barely keeping their heads above water,” incoming National Economic Director told reporters in a call previewing the executive actions.

Biden’s aides say he’ll sign more Day One executive actions than any of his predecessors, to be followed by additional regulatory and policy changes over the coming weeks. Those will includes rolling back the so-called “Mexico City policy” restricting federal funding for organizations that provide abortion counseling and revoking the ban on military service by transgender Americans.

The Day One agenda includes:

Biden plans to immediately rejoin the World Health Organization, which Trump exited in May, saying China exerted too much pressure on the agency. He’ll dispatch the government’s foremost infectious disease expert, , to represent the U.S. Thursday at the WHO’s Executive Board meeting. 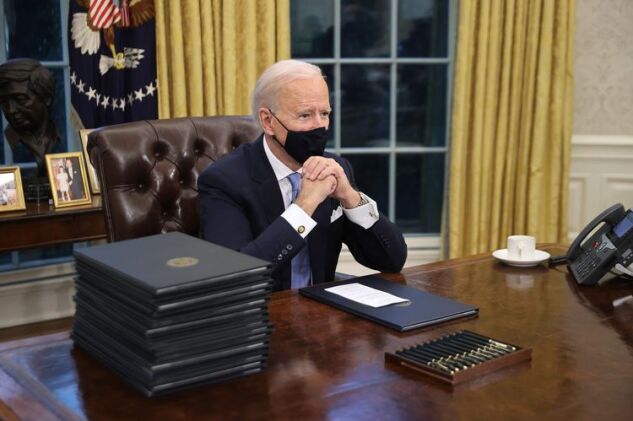 Joe Biden prepares to sign a series of executive orders in the Oval Office on Jan. 20.
Photographer: Chip Somodevilla/Getty Images

The new president’s mask mandate will require face coverings and physical distancing for everyone in federal buildings and on federal lands. The requirement isn’t itself likely to have a major impact, as many federal offices are closed or have already implemented safety measures, but the Biden administration says it’s an illustration of the government leading by example after Trump and his aides flouted federal public health guidance.

Biden will simultaneously launch a “100 Day Masking Challenge” asking Americans to mask up for the first 100 days of his administration.

His actions on the economy are intended to aid people suffering because of the pandemic. He’ll direct federal agencies to extend moratoriums on evictions and foreclosures until at least March 31.

Some 20% of renters and 1 in 10 homeowners are behind on their payments, Biden’s transition team said. His administration will request additional assistance for Americans struggling with their housing payments as part of a $1.9 trillion pandemic relief proposal to Congress.

Another action will pause the the accrual of interest and principal payments on federal student loans until Sept. 30.

Biden will make several initial moves to restore efforts by the administration to combat climate change, including re-joining the Paris accord. That deal, negotiated while Biden was vice president, requires countries to create emissions targets with the goal of keeping global average temperatures less than 2 degrees Celsius above pre-industrial levels. 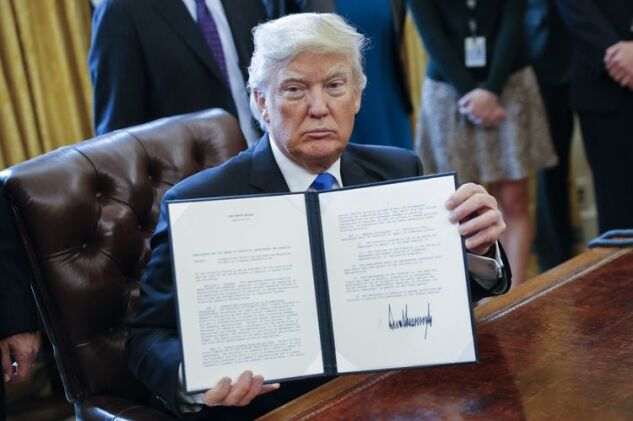 Biden will also revoke permits for projects he’s determined aren’t in the nation’s best interest -- including the Keystone XL pipeline, which was rejected by Obama only for Trump to approve it on his third day in office. Canadian officials have already registered a protest over the planned move, with Prime Minister saying Tuesday his government was “making sure that Canada’s views are heard and considered by the incoming administration.”

Fuel Standards, and Use of Federal Lands

The new president will also direct agencies to consider revising federal fuel economy and emissions standards for vehicles, appliances, and construction after the Trump administration looked to reduce requirements, calling them excessively burdensome or expensive for businesses and consumers.

Biden will also call for the Interior Department to review protected federal properties that were reduced in size or opened to commercial use during the Trump administration -- often at the request of energy companies. He plans to issue a temporary moratorium on all oil and natural gas leasing activities in the Arctic National Wildlife Refuge.

The incoming administration has also compiled a list of more than 100 agency actions taken during the Trump administration for review, in what could result in a massive regulatory revision. Also planned are broader measures the administration argues will assist disadvantaged Americans, including a policy to make it easier for the federal government to issue regulations.

No More Money for Wall

Biden is expected to repeal the national emergency on the U.S.-Mexico border, halting funding for Trump’s signature border wall that symbolized his crackdown on undocumented immigrants. The new president will order an immediately pause in construction on the barrier, and a review of how best to redirect funds diverted from military construction and counter-narcotics budgets that Trump used to build the wall. 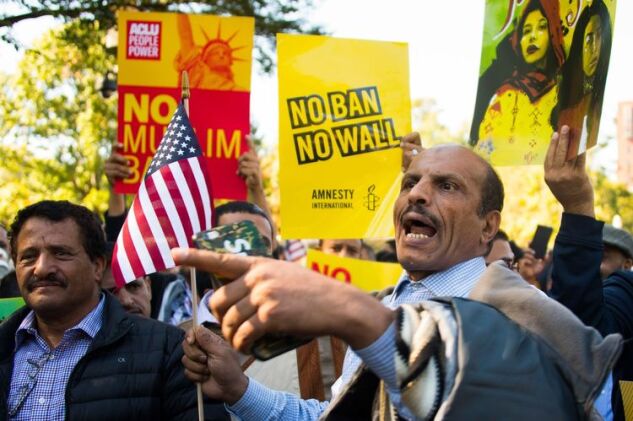 The new administration is also scrapping Trump’s travel ban on several Middle East, Central Asian and African countries, most of them with majority Muslim populations, that the outgoing president had deemed terrorist threats. Trump’s policy was “was nothing less than a stain on our nation” and “rooted in xenophobia and religious animus,” Biden National Security Adviser told reporters in a conference call.

Counting Noncitizens for the U.S. Census

Biden also intends to end Trump’s plan to exclude noncitizens from the decennial U.S. Census, a change that could affect how congressional seats and Electoral College votes are apportioned for the next decade. , director of the Census Bureau under Trump, announced his resignation this week amid criticism by the Office of Inspector General for the Census, which found career employees felt pressure to produce a report without clear rules on how to count undocumented persons.

Bolstering Sanctuaries and the DACA Program

Biden plans to repeal a Trump executive order that sought to crack down on undocumented people living in the country by withholding funding from so-called sanctuary jurisdictions, cities and counties that don’t allow their police to cooperate with immigration authorities. Trump’s order also directed federal agencies to prioritize resources for immigration enforcement over other duties.

And Biden will seek to strengthen the Deferred Action for Childhood Arrivals program that provides deportation protections to immigrants brought to the country illegally as children. Trump sought to unwind the program during his administration, believing it would provide him leverage in congressional negotiations on an immigration overhaul.

Biden will also extend a deportation deferral for Liberians living in the U.S. under a two-decade old program designed to offer safe haven to people who fled that country’s civil war. Trump sought to eliminate the protection, arguing conditions in Liberia had improved, while Biden will extend it to at least June 2022.

‘Racial Equity Review’ for All of Government

Biden will order a whole-of government “racial equity” review led by Domestic Policy Council director that will require each department and agency to conduct a “baseline review” of whether its policies disadvantage any demographic group. The Office of Management and Budget will also undertake a review to “more equitably allocate federal resources,” according to a summary of the action provided by Biden’s team.

“The president-elect has promised to root out systemic racism from our institutions,” Rice said before Wednesday’s inauguration.

Closing Down the 1776 Commission

Biden will also reverse Trump’s efforts to ban diversity training for federal workers, and eliminate the 1776 Commission -- a project Trump created last year to counter efforts to teach American students the foundational role slavery played in the nation’s creation. Trump’s commission issued its own version of the history of the nation’s founding on Monday, arguing that “the foundation of our Republic planted the seeds of the death of slavery in America.”

The new administration will sign an executive order prohibiting workplace discrimination based on gender identity and sexual orientation.

Biden will also implement new ethics rules for political appointees across the administration.

To contact the reporter on this story:
in Washington at jsink1@bloomberg.net